It's very exciting (and I do feel a bit secretive) to be talking with DIRTY LITTLE SECRETS author C.J. Omololu (known in the blogosphere as Cynjay, or Cythia). DLS was a Borders Original Voices selection and has been garnering lots of buzz. PLUS she's giving away one copy!

When Cyn and I realized, along with Jenn Hubbard, that we all had secrets to share in our 2010 debuts, we formed the Circle of Secrets... 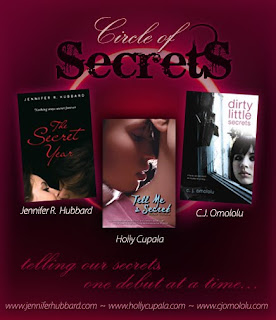 So I'm very excited to get to chat with Cyn about her own novel secrets - welcome, Cyn!

In DIRTY LITTLE SECRETS, a girl finds her mother dead in their hoarded home. As she’s spent her entire life trying to keep the hoarding a secret, she has to decide how far she’ll go to keep the secrets safe. The book takes place over less than 24 hours, and leads her to the only logical conclusion in the end. Despite how dark it sounds, I like to think of it as a hopeful story, of one girl who finally stands up and takes charge. And there’s a little romance, just because.


Holly: Hoarding is such a fascinating topic - what sparked the idea for DIRTY LITTLE SECRETS?

I was on an airplane, which is the only place I usually get to read “girl” magazines. I read an article about hoarding in Marie Claire and thought that it would make an interesting story. I’ve known some hoarders in my life, although I didn’t grow up like Lucy did, so it was fairly easy to picture the setting. I ended up doing some research with the woman that was featured in the story purely by accident. It wasn’t until later that I realized that my original inspiration came from her...

Read the rest to find out C.J.'s secrets and for a chance to win DIRTY LITTLE SECRETS!