Non-Fic Pic: The God of All Comfort

As I was down with a lupus flare this last September to April, I read many books on peace and comfort. This one rose above the stack with its devotions of encouragement for those living with chronic illness.

In The God of All Comfort, by Judy Gann, my own feelings were confirmed, and then I was lifted by truth. A simple example is loneliness. As illness continues, friends and family must resume their normal lives, so there are extended periods of being alone for the chronically ill. Gann quotes Henri Nouwen:

"To live a spiritual life, we must first find the courage to enter into the desert of loneliness and to change it by gentle and persistent efforts into the garden of solitude."

Short examples of Gann's own suffering, along with a few others living with illness, are followed by truthful reminders, prayers, and quotes. The work itself is a comfort in the reminder of God's comfort.

If you or your loved one live with physical difficulty, find solace in The God of All Comfort.

The God of All Comfort
by Judy Gann
Living Ink Books

Rgz SALON member Lyn Miller-Lachmann has been the Editor-in-Chief of MultiCultural Review; the author of the award-winning multicultural bibliography Our Family, Our Friends, Our World; the editor of Once Upon a Cuento, a collection of short stories by Latino authors; and the author of Gringolandia, a young adult novel about a refugee family living with the aftermath of the Pinochet dictatorship in Chile. Her most recent novel, Rogue--a spring/summer Junior Library Guild selection for middle school--is out this month!

We're honored to have Lyn here as part of the rgz SALON, a feature where top kidlit experts clue us in to the best YA novels they've read recently. Today, she discusses The Language Inside by Holly Thompson: 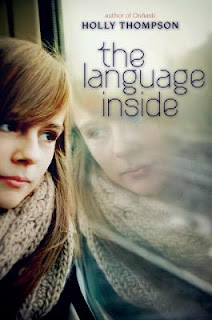 Emma Karas is a 'third culture kid.' Her parents grew up in the United States, but she calls Japan home even though she is not ethnically Japanese. When her mother is diagnosed with breast cancer and decides to return to the U.S. for treatment, Emma is uprooted from her Japanese friends and her efforts to help survivors of the 2011 earthquake and tsunami, and dropped into a world that she doesn’t understand. The stress causes her to suffer severe and frightening migraines. To take her mind off her mother’s health, her parents’ separation due to work, and her loneliness, she volunteers at a nursing home near her grandmother’s house in Massachusetts. There, she meets Samnang, a volunteer of Cambodian heritage with a troubled past, and Zena, a middle-aged poet with 'locked-in' syndrome. As she becomes comfortable in her new surroundings, she feels guilty that she is not helping her friends in Japan as they rebuild from the tsunami. Ultimately, this thoughtful, good-hearted teenager finds herself torn and having to make choices that weigh her own needs and the needs of others.

"Thompson is a poet and novelist from the U.S. who lives in Japan, Her second novel in verse is a strong follow-up to the acclaimed Orchards, which mostly takes place in her adopted home. The elegant and heartfelt poetry in The Language Inside allows the reader to explore Emma’s internal transformation as she navigates different cultures and the people in her life. Emma writes, 'it’s not just losing / Japanese words / and phrases / it’s as if I’ve lost / half of myself here / but no one knows / because I’m a white girl' There is very little dialogue, but through Emma’s eyes we see other characters clearly and Emma’s changing relationships with them. The most original aspect of this powerful and compelling story is Emma’s interaction with Zena via poetry, as we see the growing friendship between two people who, in distinct ways, understand that 'lonely is when the language outside / isn’t the language inside.'"

Hey, sci-fi/fantasy fans - I have another batch of book recommendations for you! Read my brand-new guest blog at Teens Wanna Know. 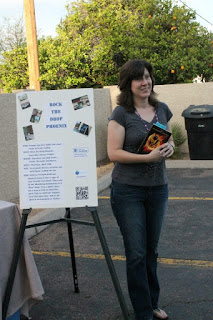 Author Sara Francis Fujimura wrote in to tell us about the great time she had organizing a special Rock the Drop workshop in her hometown! Along with Shelley Coriell and Amy Fellner Dominy, middle school and high school students participated in a bevy hands on, interactive writing exercises.

Here's what Sara had to say about the day:

Amy did 2 warm-up exercises. Shelley did a workshop on characterization. I did one on plot and one about writing stories to music. All of them were hands-on and interactive, and the teens appreciated that.

What made this writing event a little different than other community ones was that I relied on the teens, specifically my JH/HS-level Girl Scout troop, to help me run the event. I wrote the scripts, but the girls (and 2 brothers) welcomed everyone to the event, introduced all the speakers, invited people to refreshments, collected & facilitated the redistribution of books, & gave out the door prizes. All I had to do was teach my workshops and give a few directions, the girls did all the rest from set-up to tear-down. Thankfully, our troop has done several events like this in the past, so they were able to pick up the ball and run with it with little notice. We had our snacks donated by the community. For fun I printed out some literacy statistics on labels and attached them to the water bottles and snack bags before the event. Kids Need to Read in Mesa donated several autographed books as prizes, and I added a few Starbucks and Barnes & Noble gift cards. Cassandra Clare was in Phoenix last month, so I had her autograph CITY OF BONES for me as a grand prize. Some of the teens brought extra books to donate. The other books I picked up at our local library, were donated by KNTR, or were donated by friends and family.

One of the biggest positives about doing this kind of event is that teens who come are there because they truly want to be. Amy was able to get the crowd warmed up and sharing very quickly. The momentum kept going all afternoon, which was amazing.
Amazing, indeed! Thanks so much for sharing, Sara! And thanks for supporting teen literature and rocking the drop with the readergirlz!
Posted by Micol Ostow at 11:58 AM 4 comments: 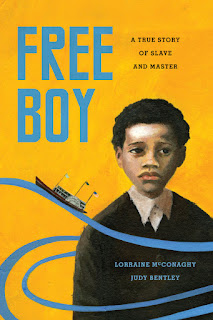 Hi Girlz,
I went to Seattle Public Library’s downtown branch to see Seattle authors Judy Bentley and Lorraine McConaghy read from their new book, FREE BOY, the story of a thirteen-year-old slave who escaped from Washington Territory to freedom in Canada on the West's Underground Railroad. Charles Mitchell was the property of James Tilton, Surveyor General of Washington Territory, and this book is a twined biography of the two.
A fascinating, lightly fictionalized account, the story answered (and raised) some questions for me about my home state: In the Pacific Northwest during the Civil War era, what were the predominant attitudes toward race? How did people of the territories—not yet States, and therefore with no voting rights—feel about slavery? What might it have been like to be one of the only slaves in Washington Territory?
Written with deft, lucid prose, this book is a reminder of why lightly fictionalized biography is a marvelous genre. Without taking as many liberties as historical fiction, FREE BOY provides richly detailed settings and imagined conversations (based on documented events) that bring the story to life. This is a book for YA and upper middle-grade readers alike—and frankly, adults. I hope you’ll enjoy it as much as I did. The author presentation was one of the best I’ve seen; relaxed and funny, but also reflective of serious scholarship.