Oh my goodness, rgz! I meant to post about this closer to the date, but now we get to prolong Diva Melissa's launch for Unbreak My Heart! 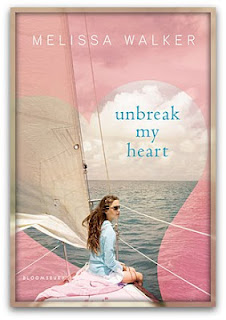 “A super cute love story! Melissa Walker will inspire readers to never stop believing in true love.” —SUSANE COLASANTI, author of When It Happens and Keep Holding On 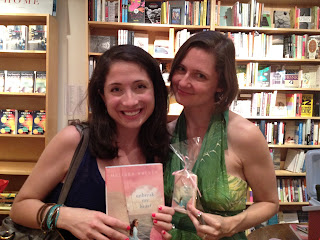 Did you know that our very own Martha Brockenbrough has a new book out? That's right -- Devine Intervention released on June 1st, and Seattle HOST Stephanie Guerra is here with the full report. 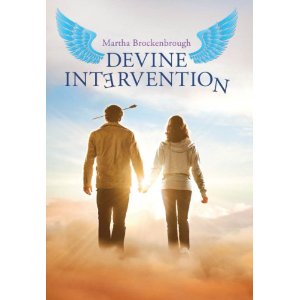 I'm thrilled to announce the release of Martha Brockenbrough's new book, Devine Intervention, a work of comic genius about the world’s worst guardian angel. Martha’s fabulous launch party was at Secret Garden Books in Seattle (see pictures below). Here are her thoughts about the launch, plus some peeks into her inspiration and writing process. Thank you, Martha, for sharing, and for writing this delectable book! 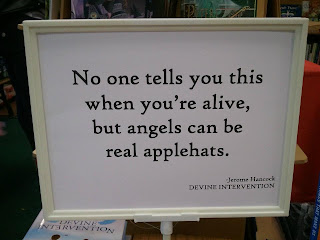 What were some of your favorite moments at the launch?
I loved the whole thing. Holy cow. I was surrounded by friends and family, delicious food—including an angel food cake from my editor, Arthur Levine—and music from a harpist who played the classic rock songs I referred to in my novel. In my book, I imagine an entertaining sort of heaven, a place where the grass is greener than green, the sky is Tidy Bowl blue, where elderly people frolic to the music performed by a heavenly choir called Nun of the Above. In real life, though, heaven is being surrounded by your favorite people on the day your life's big dream has come true. Confession: I bawled like an infant, but one who made the bad decision to wear non-waterproof mascara. 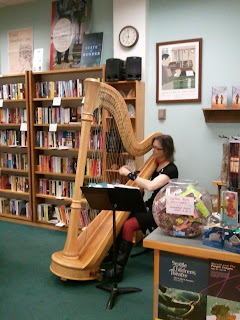 Can you tell us about the inspiration behind Devine Intervention?
A lot of things came together for me with this book, but the chief inspiration was the loss many years ago of someone I'd known in high school. She was one of those incredible people—beautiful, brilliant, athletic. And then she got cancer and passed away on her twenty-third birthday. During her memorial service, a friend said they used to talk about "when my life begins," referring to some time after graduation when they'd truly be alive. It was a deeply sad thing to hear, and that was the situation I started with, the idea of someone who'd died before she felt like she had a chance to live. I didn't want to write a deeply sad book, though, and was rescued by my character, Jerome, the world's worst guardian angel. I absolutely loved writing him. 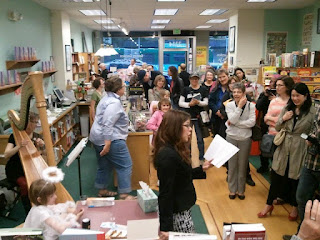 Can you tell us something about your writing process?
It took me forever to learn how to write fiction. Even though I was always a good writer in school, and even though I've worked many years as a journalist, creating a world and populating it with human beings is enormously challenging for me. For anyone who feels the same way, keep working. You'll get there!

But I finally have a system that seems to work. I start with some sort of potent situation and a character I care about. I write a sentence summarizing what the story might be. Then I wrap layers around it—additional details and complications—until I have what feels like a story arc. Then I start writing, to get a handle on the character's voice. I also wrestle with the best point of view to write the story in.

As I do this, I think of things that will enrich the story, usually scenes that are particularly important, but sometimes lines I know I'd like to use. When I feel ready, I write a chapter-by-chapter summary that I use to guide my writing. I also keep track of the characters' relationships with each other, so these can evolve in an understandable fashion.

Inevitably, I veer from the outline a bit as I learn more about the characters and the world. As long as the story is getting better, I don't mind that veering at all. Oh, and I sometimes share early drafts with very trusted friends and my agents, but I usually like to have the whole thing finished and cleaned up a bit before I pass it around much beyond that. 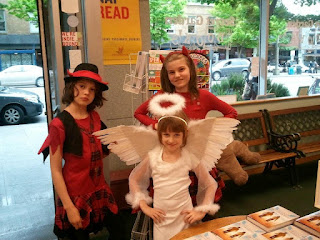 Thanks so much, Stephanie, and congrats again, Martha! 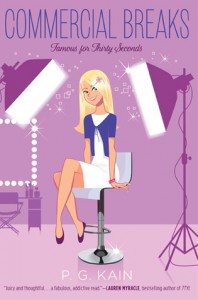 P.G. Kain is hilarious and very good at Words With Friends, I'll have you know. He also has a great website. His latest middle grade novel is out now, and he's here to share the story behind that bubbly cover:

"I really wanted the cover to convey the fact that this series is about the world of commercial castings. This is a very specific world. It's not exactly modeling, where you need to be beautiful and it's not exactly acting, where you need to be talented. Someone once told me that to be in commercials all you need is a face. That's true as you see very few amoeba or protozoa selling soft drinks on TV.

"I first imagined a cover that showed a photo of the pristine perfect world of the commercial in the center with a sun-drenched set and a tween model with an even sunnier smile.  But then the edges of the cover would be hand drawn in pencil and extend beyond the frame of photo to reveal  all of the people, cameras, riggings, etc. that were focused on making the on-set scene look 'natural.'

"[As far as involvement with the design], I was never asked to fill out one of those forms I know other authors get but I sent over many images and talked with my first editor about some ideas. The concept of using a type of collage with Polaroids was developed in house and I sent over images to expand on that idea..."

Read the rest of PG's Cover Story, and see the original cover, at melissacwalker.com.