Hello, readergirlz! What an exciting week of chats for Teen Read Week! Be sure to check out the chat transcripts if you weren't able to be there live.
It's also an exciting night in Seattle! I just got home from Third Place Books, where I enjoyed a yummy pasta dinner at a table with my trusty laptop so I could do the TRW chat, and then scooted over to The Den to listen to Justine Larbalestier. 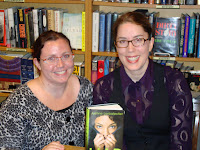 Here I am (New hair! It's dark! Pink streaks, too, but you can't so much see them here.) with the lovely and fabulous Justine.
Imagine her with an Australian accent.
Justine's new book, Liar, is kind of hard for her to talk about because it's full of secrets and lies, and she doesn't want to spoil the end . I can NOT wait to dig in and have my own reactions, then join the hordes of readers who have taken to the internet to beg Justine to reveal the "real ending."
I still learned a lot about the book and about Justine, though. I learned that Justine thought Liar would be funny, until she started writing it. I learned that it actually came to be a bit of a commentary on sexuality in YA literature, "language" in YA literature, and even YA literature itself (So. Cool.). I learned that the Scrivener program for Mac is integral to Justine's writing process. I learned about the alternative Australian high school where Justine got to "be" Turkey and the US, for a while, and how the kids who were Iran and Iraq eventually ended up going out, very peacefully. I also learned that, in Australia, it's totally normal to put beets on your pizza.
I have to say that the most thrilling part of the evening (aside from the pizza revelation, maybe) was that there was a hefty handful of teens in the crowd. Way to go, young readers! I hope to see more of you at future book events! It's really awesome when you can fit a reading into your super-packed lives. Seriously, come in your volleyball uniform all sweaty from the match; practice your violin in the parking lot 'til the last minute. No one will mind!
Can't wait to dig into Liar, yay!

Posted by Liz Gallagher at 8:48 PM

Ooh! I also can't wait to read liar! sounds like she really put a lot into it!
Okay, beets on the pizza = ew!

LIAR is so great! I love all the factoids you learned. Anyone else use Scrivener? I'm curious.

Thank you, LIZ! You are such a great host.

Justine is powerful! I love chatting with her. And you will love LIAR.

Beets on the pizza...

Really cool. And I think Australians are awesome in general ... despite the beets on pizza thing.

Haven't tried Scrivener, and I just became a PC when I've been a Mac for years, so I won't get the chance for a while. I was psyched to see an extra program with my new MS Office 2007 Suite, though -- it's called OneNote, and is made for organizing research. You can do internet screen shots, excel sheets, word docs, little notes all in one place. I'm going to try using it when I start my next book project, which will be a bit more research-heavy than my regulars. Anyone ever used OneNote? I had never heard of it 'til it popped up on my computer!

Wish I could've been there! But thanks so much for sharing the experience here.

I want Justine to reveal the real ending too. You will love Liar and it will keep you guessing.
So cool how you got to meet her :)
I want to go to school and be my own country!

Good books, good people, and good pasta - What more could you want? :)

Sounds like you had a blast with Justine. LIAR is in my to-read pile. Her MAGIC OR MADNESS trilogy were recommended reads here at readergirlz! I've enjoyed her previous works, especially HOW TO DITCH YOUR FAIRY.

Thanks for being our hostess with the mostess over there in Seattle. Rock those new pink streaks!