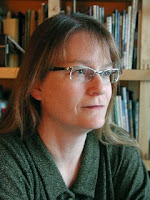 We're honored to have her here as part of the rgz SALON, a feature where four of the top kidlit experts clue us in to the best YA novels they've read recently. Here's René, reviewing Beautiful Darkness by Kami Garcia and Margaret Stohl. (Ages 14 and up. Little Brown, $17.99).

"Beautiful Darkness is the sequel to Beautiful Creatures, and is just as romantic and atmospheric as the first. Beautiful Creatures introduces us to Lena and Ethan, two people who’ve never met. Ethan, though, has been dreaming of a young woman (dreams filled with water and danger, he wakes covered in mud and water) and one day he meets her. Their meeting shakes up this world and the others. In Beautiful Darkness, Lena begins to separate from Ethan, feeling the pull to the dark side, while Ethan’s nightmares and the visions only he can see are becoming dire. These are great books for anyone who likes romance and southern atmosphere. The adults I know who have read them absolutely love them and are waiting, impatiently, for the next one."

I feel silly for not having read these books yet. I love a Southern Gothic setting, and they sound amazing. Thanks, Rene'!