We're honored to have Lyn here as part of the rgz SALON, a feature where four of the top kidlit experts clue us in to the best YA novels they've read recently. Today, she reviews Ninth Ward by Jewell Parker Rhodes (Little, Brown, 2010). 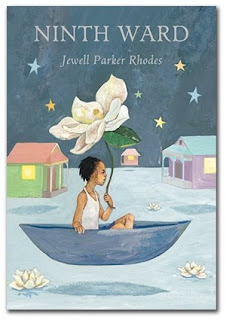 "Lanesha, who has just turned 12, lives in the Lower Ninth Ward of New Orleans with the midwife and seer Mama Ya-Ya, who has taken care of her ever since Lanesha’s mother died in childbirth. Lanesha was “born with a caul, a skin netting covering my face like a glove” and because of it, Mama Ya-Ya says she has the 'sight.' In the week before Hurricane Katrina, Lanesha—who has always been seen by the other children as an outcast because of this connection to the spirit world and who has been spurned as well by her wealthier Uptown relatives—makes two new friends and hears Mama Ya-Ya’s prophecy of a great darkness following the storm. When Hurricane Katrina hits, the Lower Ninth Ward floods, and 82-year-old Mama Ya-Ya enters her death throes, Lanesha brings everyone, including neighbor, classmate, and new friend TaShon, to the attic and then onto the roof. Gifted in mathematics as well as in sight, she uses her skills to calculate how much time she and TaShon have to escape before the water submerges them.
"An acclaimed author of novels for adult readers, Rhodes brilliantly captures the setting and the experience of so many young people trapped in the aftermath of Hurricane Katrina. Most of the novel takes place before the hurricane hits, allowing her to show the lives of people in the Lower Ninth Ward, who have been depicted in the media as faceless victims. Lanesha is a singular character, rooted in the folklore of Africa and the American South but also with dreams of her future as an engineer. Bridges are an important symbol throughout the novel: Lanesha wants to build them; she and Mama Ya-Ya serve as bridges between the living and the dead; and Lanesha and TaShon (along with their dog, Spot) find safety on the Martin Luther King overpass, a bridge over the flooded city." -Lyn Miller-Lachmann
Posted by Melissa Walker at 4:25 AM

I'm so glad there's a book that covers this part of our history so well. Thank you for the review, Lyn!