Cassel comes from a family of curse workers -- people who have the power to change your emotions, your memories, your luck, by the slightest touch of their hands. And since curse work is illegal, they're all mobsters, or con artists. Except for Cassel. He hasn't got the magic touch, so he's an outsider, the straight kid in a crooked family. You just have to ignore one small detail -- he killed his best friend, Lila, three years ago.

Ever since, Cassel has carefully built up a façade of normalcy, blending into the crowd. But his façade starts crumbling when he starts sleepwalking, propelled into the night by terrifying dreams about a white cat that wants to tell him something. He's noticing other disturbing things, too, including the strange behavior of his two brothers. They are keeping secrets from him, caught up in a mysterious plot. As Cassel begins to suspect he's part of a huge con game, he also wonders what really happened to Lila. Could she still be alive? To find that out, Cassel will have to out-con the conmen.


With White Cat, Holly Black has created a gripping tale of mobsters and dark magic where a single touch can bring love -- or death -- and your dreams might be more real than your memories.

Holly Black, bestselling author of Tithe, Ironside, and The Spiderwick Chronicles (to name a very few), has a reputation which precedes her in the best possible way. My most-respected grad-school colleagues and aficionados of urban fantasy have had nothing but lavish praise for her work, and likewise her original acquiring editor at my old stomping grounds of Simon & Schuster. When she came to speak at my Vermont College Alumni Mini-Residency this past July on the subject of world-building, I knew I was in for a treat. 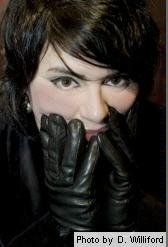 Holly's opening words of wisdom? When considering one's writing, it is best to keep in mind that "hard things are hard." Believe you me, it's a bon mot I've trotted out on many occasions since.
It is perhaps precisely because Holly has such abiding respect for the value of solid world-building that her new series draws so compelling a parallel between the black market of magic and such historical prohibitions of vices like alcohol. Her newest urban fantasy is in point of fact a smooth exercise in hardboiled noir that deftly synthesizes genres in a way that should captivate fans old and new.
December's theme at readergirlz is Compassion, and I imagine there are a myriad of ways that the theme could be applied to White Cat: compassion for a society living with seemingly unreasonable restrictions; compassion for a teen boy uncertain of his place in the world. Compassion, indeed, for the writer, who grapples with the minutia of authentic, believable world-building.
So, readers, we divas put the question to you -- in what ways does White Cat embody this month's theme of compassion? Let us know what you think!

Despite being the husband of a YA writer (Miss. Micol) I don't read a huge amount of YA, but this is one book I really, really want to read...

I remember calling you from the mini-rez after hearing Holly speak and RAVING about how I thought you'd love this one! The whole "prohibition" angle seemed totally appropriate, too, seeing as how we live above a speakeasy....

There are so many things I loved about White Cat that it's hard to know where to start! Beyond the totally cool premise, the troubled relationships Cassel has with his brothers felt real, and not at all extreme given the story. Also, the writing is beautiful in a way that seems effortless.

This has been on my list since I heard Holly speak at VCFA last summer. Can't wait to read it! I still have my notes from Holly's fabulous talk and love the way she approaches magical systems and story in general.

Highly notable: The compassion Cassel feels for Lila, and the lack of compassion his brothers feel for him.

I love Holly's quote! The compassion of a writer for him/herself while creating vast worlds like the ones Holly imagines is KEY. WHITE CAT is a wonder!

Welcome, Noah! I didn't know you two live above a speakeasy. Very cool. :~)

I love the theme of compassion. It can be found in all of Holly's works, right? I can't wait to read White Cat next!

I appreciate the grittiness of Holly's writing. Gritty and true.

It is so interesting to hear people talk about my characters like they're people you know -- it's one of the things that I think writers like best, because most of the time we're alone with these characters for long stretches of time. They become real to us and we have strong feelings about them - but we're the only people who do - so when we meet readers who want to talk about them, it makes us feel less crazy.

The thing I have been continuously surprised by is the compassion that readers have for Barron. He's a troubled and troubling guy, but many feel sorry for him in a way that I don't!

Lorie Ann - our place is a free-standing building in the West Village with an "old-tyme" bar underneath that operates like an old fashioned speakeasy. It's all very Gatsby and we love it.

And, hi, Holly! So glad you can join us! It's true, as a writer one of the headiest experiences is discovering how real one's characters become to our readers. And I find it so fascinating when people related to our characters differently than we do!

My best friend growing up was a cat. Really. :)

Everyone: Don't forget the grandfather! What did you think about that character?