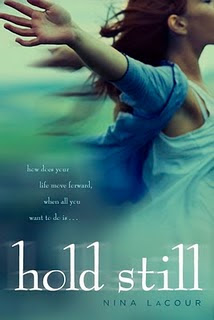 I think Hold Still, which is a beautiful book and was a Featured Title in November, has gotten two great covers (hardcover and paperback) so I had to ask Nina LaCour about each one. Here she is:

"I was super worried about my cover. My mom used to be a graphic designer so I grew up a little bit of adesign snob. My biggest worry was that the art team would make the book look to girly, or too light, that they would strike a tone that didn't suit the story. So when I heard that Mia Nolting (who had been writing out the journal entries in the novel since before I even had an agent) was going to do the cover art, I was thrilled and relieved. I love Mia's work. It's clean and delicate and has this awesome current, indie quality while still being poignant and honest and really moving. Plus, she's my friend. I loved the first concept she came up with: a girl in jeans with a camera around her neck, a strip mall behind her, a layer of text (below). The concept evolved from there to include a girl's face with the camera raised in front of it and another girl spinning in the distance, and I liked this idea of overlapping images."Then, I got a call from my wonderful editor, Julie Strauss-Gabel, who told me that people at Penguin were getting excited about the book, and what we thought was going to be a pretty quiet book was actually going to be a 'big' book for the fall season. I was thrilled to hear this news, but bummed to hear that it meant we were moving in a different direction with the cover. Mia's drawings were no longer going to be on it--instead we would be going with a photograph.

"The next cover I saw was a complete departure. It was a photograph of a mournful-looking girl with a large shadow hovering behind her. The photograph was black and white and the title was written in a red computer font. I did not like this cover. The girl was too glamorous and it felt so oppressively sad..."
Read the rest of Nina's Cover Story at melissacwalker.com.

Posted by Melissa Walker at 6:39 AM

I adore Hold Still's blue cover. Unfortunately, the copy I read in November had a different one. :(

I love both the hardcover and paper design for this book! Really captures the mood and tone of the writing.

I love the book and I love both covers, as I feel that they suit the story and the character. The cover with Mia's writing especially suits the manner in which the story is told. The second cover led me to Rosie Hardy's work, which is gorgeous. Kudos to both Rosie and Mia for their artistry, and to the art design team for finding, utilizing, and adjusting the work to fit the book!