In honor of the ice and snow (or maybe rain or sunshine, depending on what part of the country you are in!), I'm thrilled to welcome Sarah Beth Durst - Sarah Beth and I met at the winter SCBWI conference the year of her debut novel, INTO THE WILD, and we've been fast friends ever since. Here she'll share some of the story behind the story of her third YA fantasy, ICE. What better novel to read this blustery, wondery holiday?

ICE is a YA fantasy novel set in the present-day Arctic. It's about a polar bear, true love, and one girl's impossible quest across the frozen North.

I wrote this book as a love letter to my husband. It's about true love... the kind of love where you'd go east of the sun and west of the moon for each other. So this novel is very closed to my heart.

It's also about polar bears, one of the coolest animals ever. No pun intended.

Besides being really excited that it's you (I confess, I'm already a SBD diehard fan), I was thrilled to hear you were inspired by East of the Sun, and West of the Moon. How did the tale influence your story?

I love fairy tales. I think they have tremendous power. For many of us, they're among the first stories we ever hear, and as such, they help form our understanding of what story is. Plus they are a huge part of our culture, and everyone brings such emotional baggage to them. These things make them a great tool for a writer.

So I knew I wanted to work with a fairy tale, but I didn't want one where the girl just slept for the entire tale. Or was stuck in a tower. Or was dead.

I fell in love East of the Sun, West of the Moon because it's about a fearless girl who saves an enchanted prince, instead of vice versa. In the original tale, she's asked multiple times, "Are you afraid?" And the answer is always, "No, she wasn't." That little exchange was the spark that became ICE.

From there, I veered rather far from that original spark. My fearless girl became the daughter of an Arctic research scientist, and my prince became a kind of Angel of Death for polar bears.

Did it take you anywhere unexpected, either in writing or in real life? 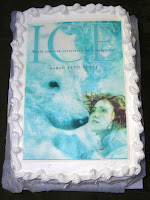 Yes, it took me to the Arctic. Not literally. (I really, really don't like being cold. Or hot. I prefer to be temperature regulated.) But I buried myself in research, and I was able to live vicariously through Cassie as she treks across the frozen sea, the tundra, and the Canadian boreal forest.

I think one of the best things about being a writer is that it lets you live other lives and go to places that you'll never be able to go to in real life. It's the ultimate in armchair – or more accurately, desk chair - traveling.

I love to hear the story behind stories. So what's the real story behind ICE? Any secrets you might be willing to share?

Raisinets. That's the secret to writing. I keep a bag next to me while I write to keep me going.

Seriously, the secret is to find what keeps you going. I strongly believe that the key to being a writer is perseverance. So whether it's a quote next to your computer, a person who cheers you on, a set of songs that puts you in the mood, or a particular food, use whatever works for you and don't give up!

Oh my gosh that cake is amazing! I don't know that I'd have the heart to cut into it.
(Who am I kidding? When do I resist cake?)

Thanks for sharing, Sarah!

Micol: It was delicious. But we did leave the faces for last since it felt odd to chow down on my protagonist's nose.