Rgz Street Team: Olivia reviews The Extraordinary Secrets of April, May and June by Robin Benway

Today, Olivia reviews The Extraordinary Secrets of April, May and June, by Robin Benway:

"The relatively normal life of the Stephenson sisters has started to spiral out of control. Their parents decide to separate. They have to move to a new city without their dad and attend a new school. And as if that wasn’t difficult enough, each sister has begun to develop a super power that had lain dormant since their childhood. 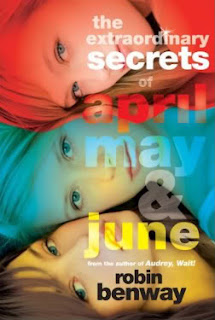 "April, the studious oldest sister, feels responsible for holding her family together, and is often wracked by anxiety. April finds even more to worry about when she develops the power to see into the future- through confusing visions accompanied by flashing red lights. She is especially concerned about what she sees in these visions, not just for the future of her sisters, but also because of a surprising development in her own love life: especially since her new friend Julian is present in some of her less-than-comforting insights into the future.

"May, the rebellious middle sister, is especially resistant to their new life and longs to live with her dad instead of her mom and sisters. She often feels ignored both by her family and peers, and soon develops the ability to actually disappear to the point where she is invisible to all those around her. While this might seem like a blessing in disguise for May, she must learn to control her power, as her disappearances are involuntary and occur at very inconvenient times. May also struggles with her failing grade in European History and her Stanford-obsessed tutor, Henry, with whom she does not get along well at all.

"June, the vain youngest sister, is definitely the most carefree of the sisters. However, she does have her own problems to deal with as a freshman in high school who is trying to finally become popular by winning the affections of one of the most popular girls in school, Mariah. Much to the horror of April, June decides to use her power, mind-reading, in order to manipulate Mariah and others to please them. April’s concern for June heightens when she experiences a frightening vision that makes her fear for June’s safety.

"Though The Extraordinary Secrets of April, May, and June was narrated by a different sister in every chapter, each central character is so clearly defined that the reader hardly ever confuses the three. Benway does an admirable sister of assigning each sister a tone and narration style, and keeps these consistent throughout the story.

"While the story is primarily focused on the sisters and their struggles together, each also has an entertaining individual subplot. While April and her new friendship with Julian, and May and her tutoring with Henry are both engaging storylines, June and her journey to popularity is the most compelling. In the end, these subplots result in personal growth for each of the sisters as well as important lessons learned--but without a 'preachy' feeling.

"In fact, one of the most remarkable aspects of the book is that the author, Robin Benway, is able to become so in-tune with the emotions of teenage girls. The thoughts and feelings of each sister seem believable and relatable, as if they were penned by a teenage girl herself, instead of by an adult who might not be so connected to the thoughts and values of the youth.

"Overall, The Extraordinary Secrets of April, May, and June is a very entertaining and humorous read. I would recommend this book to anyone who enjoyed Benway’s other novel, or to anyone who enjoys the perfect mix between lightheartedness and complexity that Benway manages to achieve in this novel."
Posted by Melissa Walker at 5:38 AM

Email ThisBlogThis!Share to TwitterShare to FacebookShare to Pinterest
Labels: olivia, rgz street team, robin benway, the extraordinary secrets of april may and june

I loved April, May, and June! Robin Benway really did such an awesome job of making each of the 3 girls very distinct characters. I still need to read Audrey Wait!

Thanks, Olivia. I was intrigued by the cover, and you fleshed it out wonderfully. Can't wait to get my hands on Robin's latest!

Thanks, Olivia! Robin is fantastic!