Featured Title: LOVE IS THE HIGHER LAW, by David Levithan

Happy Monday, and happy holiday season, readergirlz! It seems to me that our theme for December, Compassion, is perfectly suited for this time of year, and more than that, this week's featured title, Love Is the Higher Law, is a book that perfectly embodies that theme. 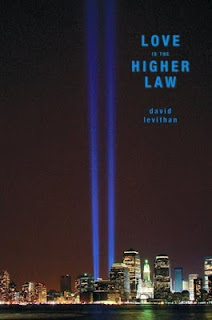 The lives of three teens—Claire, Jasper, and Peter—are altered forever on September 11, 2001. Claire, a high school junior, has to get to her younger brother in his classroom. Jasper, a college sophomore from Brooklyn, wakes to his parents’ frantic calls from Korea, wondering if he’s okay. Peter, a classmate of Claire’s, has to make his way back to school as everything happens around him.

Here are three teens whose intertwining lives are reshaped by this catastrophic event. As each gets to know the other, their moments become wound around each other’s in a way that leads to new understandings, new friendships, and new levels of awareness for the world around them and the people close by.

David Levithan has written a novel of loss and grief, but also one of hope and redemption as his characters slowly learn to move forward in their lives, despite being changed forever.

Some readers who come to LITHL may not have actually lived through 9/11, which makes this book important in how it communicates the ways that the powers of kindness and compassion helped New Yorkers -- and those who weren't physically here on that day -- move beyond the terror and incomprehension of the attacks. For those of us who were here, and who recall the aftershocks all too vivdly, Levithan's testament to human generosity feels refreshingly -- and reaffirmingly -- accurate.


"This, I think, is how people survive: Even when horrible things have been done to us, we can still find gratitude in one another."


That's a quote from Claire, one of the three protagonists of the novel. Last week, when I put out the question of other examples of compassion in the book, our own divas had this to say:


There's compassion (and shock, and sympathy, and empathy, and disbelief) in Love is a Higher Law from the beginning. For example, flip through just the first chapter and look at that scene where Marisol grabs Claire's hand. (Little Willow)


I love the Travis show scenes in LITHL... the compassion in a room of strangers. And I just happened to be at that show, too. Extra special! (Melissa)

This sounds wonderful! I'm definitely going to check it out.
Thanks.
Lisa ~ YA Literature Lover

It's a great read, Lisa!

I haven't yet read it either, Lisa. I love David's work so am eager to snatch this up. Just the title is an example of compassion.

If you love David's work, you'll LOVE this one, Lorie Ann!

It's so hard to think about 9/11, that I can't imagine approaching a book that lives inside that event. But this one is done beautifully, and it's full of compassion and heart on every page.

So true - it manages to be completely uplifting despite such bleak, serious subject matter.