Interview with Andrea Wittgens, musician for the Operation TBD trailer!

We're very excited to feature an interview with Andrea Wittgens, beautiful Seattle music-maker who graciously gave us permission to use "Marching Orders" in our Operation TBD trailer. Check it out!

Here's our interview with Andrea:


Holly Cupala: Your songs have this sultry, narrative quality, like the soundtrack to an old movie. Where do you get your ideas?
Andrea Wittgens: It's true. I'm very influenced by many cinematic or retro sounds. My lyrics are often fantastical and so the older sounds seem to fit the mood of the lyrics best. I've always loved fiction and my latest album "In The Skyline" is pretty much an ode to my run away imagination and draw towards escapism. So there are lots of lyrical references to fantasy like Oz, Mordor, Creature Features, drama queens. And the music had to have some of that same sense of drama and "action-adventure."

HC: What is the process of making a song, from idea to finished single? 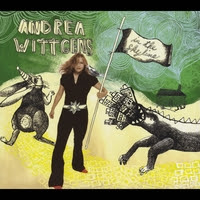 AW: Oh, I do all manner of things to mold a song together. I'm definitely not one of those lucky people who sit down and start strumming and singing and "voila!" there's a hit song. I do a lot of collecting of ideas (my car is full of bank receipts with little phrases hastily scratched at traffic lights). I keep a big box of scraps of words and phrases that I sometimes dump on the floor to see where the weird combinations of ideas fall. I spend hours just messing around at the piano, humming or singing nonsense "placeholder" words. Usually I get the musical ideas first and pretty easily and then I have to tinker with finding the appropriate words to fit the musical world. The chorus is sometimes the hardest (and last part) to come together because it's supposed to somehow "sum up" the song but it also needs to be simple, memorable and somewhat. I find that if I can write one verse and one chorus then I'm most of the way done because then I have the "template" for the song.

HC: I’m fascinated by the how’s and why’s – how do you create the unique sounds on your albums?
AW: Well, the basic tracks are done by the typical pop rock set up: drums, bass, piano, guitar and of course voice. But there's lots of effects that you can add to these instruments. There's lots of "studio magic" in the post production that can make things sound more interesting or fit the mood of the lyrics. Some examples are: reversing a guitar track so that it sounds kind of garbled and out of time, putting lots of reverb and delay on a voice so that it sounds like it's in a huge cathedral. I liked doing that with some of the operatic high voices because it created a really eery sound. We also used an instrument called a "mellotron" that plays really old crackly samples of strings and flutes - I loved messing around with that! At the beginning of "Marching Orders" the tempo is set by a pair of high heels - that was me walking around the Odd Fellows building on Capitol Hill with a metronome in my ear to set the right tempo while Vince Gates (in whose studio we recorded much of the album) followed me around with one of those fuzzy movie mics. In general recording is fun because you can layer and layer and layer sounds until they create something completely different. Many of those songs have about 70 tracks in them!

HC: What are some of your influences, literary and otherwise?
AW: Well I love the fantasy books of my childhood (Lord of The Rings, The Narnia series and many other fantasy books). Robertson Davies is a wonderful Canadian author who wrote many great books my favourite being "Fifth Business." I love cinema - anything from big epics like Lord of the Rings to smaller quirky comedies like "Waiting For Guffman." I like to be wowed and I like to be endeared to characters. That goes for music too. I love all sorts and genres as long as I'm overtaken and swept away.

HC: Have you worked on other musical projects?
AW: Yup. I used to front a band called Sugartown before I started to do these solo projects. I also play with a great band called Central Services who happens to have a kid's offshoot band called The Board of Education.

HC: What are you working on now?
AW: Well, don't laugh, but I'm actually working on a Christmas album! Every year, Christmas takes me by surprise, I get swept up with the season and wish that I had a Christmas album to offer. So this year's new year's resolution was to chip away at one all year. It's been fun - especially since it's still winter. I don't know how I'll feel in July (that's perhaps when i'll start the festive Latin-inspired portion of the record!).

HC: If someone were to ask you how to become a musician, what advice would you give?
AW: All you have to do to become a musician is start sitting down with an instrument or your voice or both and regularly work at it. There's never really an arrival point or an ending point (and looking for one is more stressful than it's worth). To jump into the "biz" of music and become a professional musician is a bit more concrete but there are still many ways to do it. I think the best thing to do first is create something (a song, an instrumental sketch, some lyrics) and find a way to record it so that you can start showing people what you're music is all about. This is the best way to meet other musicians, find performance opportunities and grow as an artist. I've had a lot of fun helping some of my teen students create and record songs and music. They've learned a lot about the whole process of getting a song idea out of their head and onto CD.

HC: Where can we find your music?
AW: Well, it's in many different places online but I have them all listed on my website store page. I also always bring CDs to my live shows which are listed on the calendar page of my website.

Thanks, Andrea, for the music and the interview! Readergirlz, check out the trailer and pass it on!
Posted by holly cupala at 6:27 AM

I love that song, and Andrea seems like an awesome person!

Thank you, Holly! This is a great interview. I loved reading about Andrea's creative process.

Yay for those high heels that kick your trailer straight into action!

Thanks for sharing your work with us, Andrea!

Interesting how the creative process is largely the same whether crafting stories, puzzles, music, needlework designs, and who-knows-what-else.

And add another thumbs up for Robertson Davies, too.

I like the song for the ReaderGirlz video, its really different and neat! Thanks for the interview!

Nice interview! I love the song on the trailer too!

Thank you again for the music and the interview, Andrea! We love "Marching Orders" and your albums. Can't wait to give one away at the TBD party tonight!

I LOVED this interview a TON. So interesting and well-done.

It was a real honour to be involved with readergirlz! Thanks so much!
Andrea