Giveaway: 3 Copies of Flirtin' with the Monster 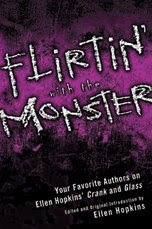 We're excited to have three copies of Flirtin' with the Monster (May 2009) to give away this week, courtesy of BenBella Books.

Our featured author Ellen Hopkins served as editor to a host of other writers as they explore her books Crank and Glass, from the straight truth on the physical effects of methamphetamine addiction to the psychological consequences of keeping secrets (and how Hopkins' books have encouraged so many teens to reveal theirs).

Flirtin with the Monster includes an essay by Ellen's real-life daughter (the basis for the character of "Kristina") that tells her version of the events that inspired the books--along with perspectives from "Scott," "Jake," and ten-year-old "Hunter," the baby from Crank.

Hearing from experts, authors and even "characters"? What a great way to delve more deeply into Ellen's awesome books!

For a chance to win one of the three copies we have, make sure you're a follower of the readergirlz blog, and tell us below what other books you'd like to delve this deeply into! (Good news: Mind-Rain, an exploration of Scott Westerfeld's Uglies series, is out in June 2009). We'll pick three winning commenters at random next week.

PS-The winner of the final week of the 5-week contest, as announced during our LIVE! chat last week, is Paradox! Congratulations, P!

Email ThisBlogThis!Share to TwitterShare to FacebookShare to Pinterest
Labels: ellen hopkins, flirtin with the monster

I receive the newsletter. I'd love to delve into Wintergirls.

I'd like to delve into the new Sarah Dessen book and the new Alice book.

Honestly, I'd love nothing more than to delve deeply into Thirteen Reasons Why by Jay Asher. Someone once commented and said that it's a story that needs to be told, and I agree hundred percent.

Hmm..Speak has already been delved into..I don't know about Ellen Hopkin's books..how about something by Sarah Dessen?

I'm not entering, but just to add my vote, I wanna delve into STARGIRL and LOVE, STARGIRL. Reading these right now and I just adore them.

Does following through blogroll count? (I have been following for awhile but not through Google. If so, please tell me. =) Though you would have to leave a message on my blog if I forget to come back!)

Hm, I would say Cold Hands, Warm Heart. Amazing book. =D A lot of controversy involving organ donations and all.

What about Willow by Julia Hoban?

Thanks about the info of Scott Westerfeld's new book!

I'd like to delve into paper towns by john green :D

Not totally new, but how about Big Fat Manifesto by Susan Vaught?

I would like to delve into Tamora Pierces world, just because she plans out the logistics really well

I'm a follower & a subscriber. I'd like to delve into The Graveyard Book
Neil Gaiman

The sad thing is that right now I would very much love to delve into any book, but I just don't have time!

And, if I had my choice, I'd read Speak right now.

Congrats Paradox! I would love to delve into HUNGER GAMES! Really awesome book!

I'd really like to explore The Graveyard Book by Neil Gaiman. Thanks for the chance to win.

I just followed the blog, though I thought I already had, lol.

I'm getting ready to delve into Impulse- it finally came in at my local library. For future books, I can't wait to delve into Along for the Ride by Sarah Dessen and As You Wish by Jackson Pearce, as well as a LOT of books, lol.

I am a follower and I'd love to dive further into "North of Beautiful" or "Willow", both are excellent books!
Thanks so much,
Darby
darbyscloset at yahoo dot com

I'm about to get into Wake.

This looks great! Please enter me!

I'd love to delve into one of Steve Berry's books. They're all fascinating to begin with!

Please include me in your giveaway. I would like to delve into the new Sarah Dessen book.
Thanks
debbie
debdesk9(at)verizon.net

Hey This Is A Great Contest!!
I'd Love To Dive Into North Of Beautiful!!

Please Enter Me,
I'm A Follower..

I'm a follower. I have to agree with some of the other commenters on the "delve in" book: Wintergirls, Thirteen Reasons Why, or the Stargirl series.

I am a follower and I am planning on picking up Thirteen Reasons Why by Jay Asher this weekend. I would love to go into that more deeply! Thanks for the giveaway!

I'd like to delve more deeply into The Lovely Bones by Alice Sebold.

I'd like to delve into Lisa See's new one.