Rgz Salon: Words in the Dust, Reviewed by Lyn Miller-Lachmann

We're honored to have Lyn here as part of the rgz SALON, a feature where four of the top kidlit experts clue us in to the best YA novels they've read recently. Today, she reviews Words in the Dust by Trent Reedy (Scholastic, 2011).
"Thirteen-year-old Zulaikha hardly remembers her mother, a victim of Taliban violence in Afghanistan, or how to write the letters and words her mother taught her. Disfigured by a cleft lip and protruding teeth, called Donkeyface by both the neighborhood bullies and her own brother, and ordered around by her father’s demanding second wife, Zulaikha faces a bleak future. Then she meets Meena, an elderly former professor who was a friend of her mother’s. Meena inspires Zulaikha to learn to read and write, and the American soldiers occupying her village offer work for her father and an operation to cure her cleft lip. 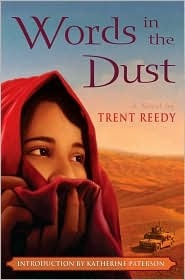 However, promises made aren’t always kept, and when Zulaikha’s beloved older sister is promised to an older businessman who lives far away, the young woman endures terrible loss and finds unexpected allies.
"Reedy, who spent a year in western Afghanistan with the U.S. Army, engages all five senses in describing a setting he knows well. The story begins slowly as the author builds Zulaikha’s world, but Reedy rewards patient readers with fully realized characters rooted in their land and way of life. The immediate and extended family present a large number of characters who could easily blend together, but Reedy succeeds in distinguishing them through a combination of precise physical description, well-drawn personality characteristics, and location within the family and community dynamics. The principal characters—Zulaikha, her immediate family, and the female American officer—go beyond stereotypes in ways that are surprising and revealing; readers are treated to an intimate view of cultural conflicts, changing gender roles, and a society in transition.
"As the United States commits to a military operation under the 'responsibility to protect' doctrine, Reedy’s remarkable novel shows U.S. forces acting for the benefit of a community. At the same time, he doesn’t shy away from depicting the cultural conflicts and other perils inherent in this approach. Female officers behave in ways that shock the local population, expectations give way to disappointment, and buried resentments threaten to explode into violence. Regardless of one’s view of the current action in Libya or the wars in Afghanistan and Iraq, Words in the Dust offers a concrete, emotionally powerful portrait of one girl, one family, and one community that sheds light on many others." -Lyn Miller-Lachmann
Posted by Melissa Walker at 4:30 AM

This sounds beautiful and intriguing. Thanks for drawing attention to the work, Lyn!

I got to hear this author speak in February. I was so moved by his story and how it related to the book he'd written.