Featured Title: FOR THE WIN, by Cory Doctorow 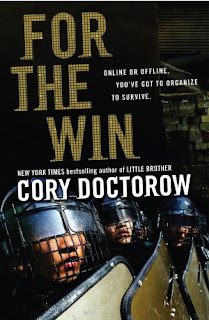 Hello, readergirlz! As I mentioned on Monday, for our first Featured Title of the month, we're mixing things up a bit (it's been a week of big rgz announcements, so why not?)! Cory Doctorow's For the Win is our first selection on the theme of Risk-taking, and on Monday, we asked what you think is risky about writing for teens. One comment that came up was the tendency of the "adult" publishing world to sideline or de-legitimize the genre.
(Side note: I mean, really?) 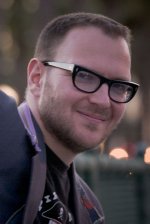 Here's what Booklist had to say about For the Win:
Doctorow is indispensable. It’s hard to imagine any other author taking on youth and technology with such passion, intelligence, and understanding. Set in the near future and in locations across the globe, the story involves a sweeping cast of characters making a living in such virtual-game worlds as Svartalfheim Warriors and Zombie Mecha. Many of them endure physical threats from their bosses to farm virtual gold, which is then sold to rich First World gamers. Then these brilliant teens are brought together by the mysterious Big Sister Nor, who has a plan to unionize and bring these virtual worlds—and real-world sweatshops, too—to a screeching halt. Once again Doctorow has taken denigrated youth behavior (this time, gaming) and recast it into something heroic.


Cory has asked that we share with you this excellent article originally written for Locus magazine, where he reflects on his own commitment to writing for teens, and the ways in which a risky genre - and the risky, emotion-charged behavior of teens themselves - make for an appealing literary landscape to any reader or writer. Here's an excerpt:

We couldn't agree more! We urge you to check out the complete article over at Locus. And in the meantime, we want to know - what are some of the risks you've taken (as a teen or otherwise), and in what way/s did that risky choice enable you to grow?

Email ThisBlogThis!Share to TwitterShare to FacebookShare to Pinterest
Labels: Cory Doctorow, featured title, For the Win

I love that Booklist said Cory is indispensable. I agree! I'm super thankful he esteems teens and brings his work to them. Such quality demands the adult world's respect. Demands it.

The teens' risk assessment and response are a plot-lover's dream!

Thanks, Cory! And welcome to rgz!

I love this take on Risk. It's true--when you're a teenager, every day has risks, first-times, and situations that require courage.

PS-Cory is definitely indispensable and he also makes amazing tiny origami cranes during book signings (I sat next to him at Books of Wonder last year).

Yes, the stakes feel so high when you're a teen. So many firsts, so many things that feel life-changing (and sometimes are). This urgency is well captured in FOR THE WIN. My 14- and 16-year-old sons thoroughly enjoyed it, too, although they knew far more about virtual worlds than I did before I started reading. Love the way Doctorow created a powerful teen union in the "Webblies." Great metaphor!

Michael: Well, I never considered anything else. I find ebooks very hard to read, primarily because there's so much else you can do with computers. Giving away ebooks to tempt people into buying print books has been a solid strategy to date. I can't imagine why I *wouldn't* do print editions!

Can you talk about the political situation in the world right now and how you feel youth are being educated on topics such as unions and basic rights and wrongs of taking advantage of the underprivileged?

I think that despite the attempts of the far-right to spin the Egyptian (and other middle-eastern) uprisings as fundamentally Islamic or in some other way suspect, that the narrative of brave, unarmed (or, in the Libyan case, underarmed) civilians braving police, torture and death in the service of freedom resonates strongly with kids' own innate sense of justice for underdogs. I also think that the fact that there are trade unionists at the heart of these uprisings is inescapable and runs contrary to the American conceit of unions as lazy and obstructionist.

In the US, the restrained, dignified and massive struggles in the midwest are moving. I'm not in the US and it's hard to judge the extent to which this is appearing on kids' radar there, but judging from the number of young people appearing in the protests themselves, I have hopes of a core of radicalized student activists who take this as their starting point (certainly we've seen that here in the UK).

Radicalized students are now using technology in really clever ways (see, for example, http://sukey.org/) and I think there's a major rush of hacktivism in the offing.

I'm listening to the audiobook version on Overdrive right now (hooray for libraries and electronic media). It's really hard not to like the characters and what they are fighting for - both on a personal level and on a more universal one. Plus it brings back more than a few memories for me!