Today, Olivia reviews The Lying Game, by Sara Shepard (which will soon be a show on ABC Family, too!):

"In The Lying Game, the author of the Pretty Little Liars series, Sara Shepard, presents the classic long-lost identical twin premise—but with an interesting twist.

"The story is told through the perspective of Sutton Mercer, a 17-year-old girl who exists as a spirit and believes that she has been murdered but doesn’t remember many of the details of her life or her death.

"Sutton watches as Emma, a 17-year-old girl who has been in foster care all her life and looks exactly like her, discovers Sutton’s Facebook page. Emma’s foster brother had shown her a video of Sutton on the internet, and Emma noticed their likeness and immediately believes that Sutton is her long-lost sister. Emma sends Sutton a message, and Sutton responds quickly, inviting Emma to come visit her in Arizona—even though the real Sutton is no longer alive. 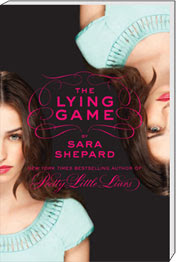 "The story unfolds as Emma goes to Arizona to visit Sutton. Expecting an emotional reunion with her sister, she is shocked to discover that Sutton’s family and friends believe that she is Sutton, and she is easily able to take Sutton’s place as Sutton herself is missing. At first, Emma expects Sutton to return, but eventually she realizes that something might have actually happened to Sutton—especially after she starts finding notes and getting text messages telling her that Sutton is dead—and that she will be next if she doesn’t “keep playing along” and pretend to be Sutton.

"While Sutton appears to have lived a charmed life of wealth and luxury, surrounded by beautiful and popular friends, as Emma gets deeper and deeper into Sutton’s life she discovers that everything was not as it seemed. Sutton was obviously the 'queen bee,' the leader of her clique of friends, and adored by many. However, she made a lot of enemies along the way, too—especially because of her infamous contest with her friends called 'the lying game.'

"As Emma puts together more and more pieces of the puzzle that is Sutton’s life, Sutton begins to regain memories as well, though she is still generally unclear about who her murderer might be. Emma and Sutton are both simultaneously solving Sutton’s murder, and the reader is able to attempt to solve the mystery as well, and is presented with many different suspects and pieces of evidence that could incriminate them throughout the book.

"While the book did not have a conclusive ending (much like many of the Pretty Little Liars books), the reader isn’t left with a complete cliffhanger and the next book in the series, Never Have I Ever, will be published in August 2011.

"Like Shepard’s other novels, The Lying Game is fast-paced and exciting. While Shepard does give the basic information necessary to understand the story, she doesn’t reveal some of the incidences or characters that are brought up throughout the book, as Sutton herself does not remember these parts of her life. Some of these smaller mysteries are resolved through Emma’s investigations, but others are left unsolved, presumably for later books in the series.

"Also, while it would have been easy for The Lying Game to fall into many of the predictable teen-novel stereotypes (such as 'long-lost-siblings' or 'mean girl clique'), the novel is actually very refreshing and original, partially because of the mystery and suspense aspect of it.

"I would recommend The Lying Game to anyone who enjoyed the Pretty Little Liars series, or anyone who wants something more than a surface-level young adult novel. While I won’t claim that I was especially enlightened or enriched after reading it, it was a real 'page-turner' and kept me entertained." --Olivia
Posted by Melissa Walker at 5:30 AM

Thanks, Olivia! I've been curious about this series!

Have heard good things about this series - intriguing!

I think I'll check this out. I thought Pretty Little Liars was addictive! We all need books that are purely entertaining in our lives.

Awesome, Olivia! I appreciate your closing honesty as well. And yes, Shelf Elf, we do need entertainment!