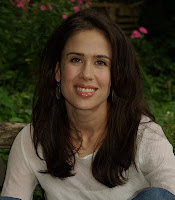 Welcome our brand new Seattle Host, Stephanie Guerra! She teaches children’s literature, young adult fiction and a seminar in writing instruction at Seattle University. She also heads a volunteer creative writing program at King County Jail, and researches and speaks about literacy instruction for at-risk and incarcerated young adults. Stephanie lives in Seattle, Washington with her husband and children. Her debut young adult novel, TORN, will be published by Marshall Cavendish in spring of 2012.
Stay tuned for Stephanie's reports of Seattle book events! Today, she shares a book review of Hush by Eishes Chayil:

"Gittel Chava Klein is the beloved daughter of caring parents, has good friends, and loves her life. So why, at seventeen, is she haunted by memories of her best friend, Devory, who died in the fourth grade?

"Gittel’s tightly-knit religious community has managed to create a social enclave within the bustling world of Brooklyn: inside her neighborhood, the internet does not exist; only Jewish newspapers are read; and everyone wears the same style of clothing that their great-grandparents wore. Boys and girls are educated for their respective roles as Torah scholars or housewives and teachers; and no one knows anything about sex until the week before their arranged marriages.

"Love, respect, and loyalty thrive in this community—but that very loyalty can cause people to protect secrets that should not be kept. As Gittel approaches marriage age, fragments of recollection come together, and she begins to question the facile explanations of her friend’s death offered by her parents and other community members. The more those around her try to 'hush' her questions, the more frantic Gittel becomes to discover the truth—and to make it known. But at what cost? Will any young man want to join lives with a trouble-maker?
"Part mystery, part memoir, and part drama, HUSH is a heart-wrenching and inspiring look at the price paid when communities hide dangerous secrets. The author, a Hasidic Jewish woman, has chosen to write under the pseudonym Eishes Chayil—in Hebrew, a woman of valor. (In the novel, the term is used to pressure Gittel to stop asking questions about her friend’s death.) Chayil opens doors to think about the many groups that have silenced voices to protect themselves from scandal, and the urge in all of us to “look away” from things that cause us discomfort or shame. Written in lyrical prose, with a tight and riveting plot, HUSH is a call for attention to a painful issue, written by a woman who refuses to keep silent—a woman of valor."

Posted by Melissa Walker at 5:29 AM

I LOVED this book so much. I really hope everyone reads it. It's such a soft meditation on the intimacy of this type of community -- both the good and the bad.

And thanks for the review!

Welcome Stephanie and thanks for the review. I LOVED this book, too - actually Melissa and I were raving about it the last time we saw each other.

I've been wanting to read this book. It's so nice to see it reviewed here. Thanks!