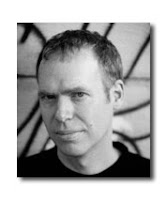 We are thrilled to welcome Scott Westerfeld to readergirlz. His latest novel Leviathan is our March pick! Check out the our interview with Scott, book party ideas themed around both books, and our Reach Out project idea--as well as the awesome soundtrack Scott has chosen for the book--on readergirlz.com.

Here's a little about Leviathan:

Prince Aleksander is on the run. His own people have turned on him. His title is worthless. All he has is a battle-torn war machine and a loyal crew of men.

Deryn Sharp is a commoner, disguised as a boy in the British Air Service. She's a brilliant airman, serving aboard a living airship. But her secret is in constant danger of being discovered. With the Great War brewing, Alek and Deryn's paths cross in the most unexpected way... taking them on a fantastical, around-the-world adventure that will change both their lives forever.

And the buzz...
"Leviathan is steampunk at its best: an imaginative historical and technological adventure filled with characters of heart and courage. Any one who dreams of following her dreams and discovering her destiny will soar through this book." - Dia Calhoun, readergirlz diva

"This steampunk adventure is sure to become a classic." - School Library Journal

"The request line for the sequel can start forming now." - The Bulletin

"When a book pursues you into your dreams, you can't ignore it." - Sunday Telegraph

Westerfeld was named one of eight YA writers who shaped the decade by Amazon's book blog.

Here's the amazing trailer for Leviathan:

We are excited to have the amazing Scott with us this month! Join us all month right here on the blog for discussions and mark your calendars a LIVE chat on Wednesday, March 17th at 6pm PST/9pm EST.

Posted by Melissa Walker at 6:54 AM

This is going to be fun! Welcome, Scott.

Howdy, Westerfans! Come on in. Don't be shy. Introduce yourselves!

Welcome to readergirlz, Scott. It's going to be a fantastic month.

OMG OMG OMG! I love Scott Westerfeld and I love this book. So glad you are featuring him! I can finally convince some girls to read this one!

Scott rules. This will be a great month!

Welcome, Scott! So nice to have you here.

Hi Scott! We're so happy to have you here all month long. Lucky readergirlz!

I just read Leviathan and it was awesome! The trailer is amazing too. I'm really excited for this month's discussions.

What an exciting month! Welcome, Scott!

Ooh fun. This book has been hanging out on my nightstand for a couple of months, but I think I need to get it read by 3/17 now!

Welcome Scott! Steaming ahead into March and spring with Steampunk and Leviathan! It's going to be terrific.

Hi to everyone, and thanks for coming by. I hope you enjoy the month. There's so much cool steampunk stuff out there, the RGz and I will have lots to share.

For a thoughtful take on exactly what steampunk is and what it means, check out Cherie Priest's essay:

Thanks for the link. I'm grabbing Cherie's book!