Carrie Ryan! She writes! She talks! She reads! She's awesome!

Hey, readergirlz! Exciting day! Carrie Ryan's here, and we announce a giveaway toward the bottom of this post.

Carrie Ryan is on a blog tour right now to celebrate the release of The Dead-Tossed Waves, the companion book (in the same world! with zombies!) to The Forest of Hands and Teeth.

Today, Carrie's with us. We couldn't be happier to host her! We've got a video conversation with Carrie, me, and Holly Cupala!

Carrie talks about: How The Forest of Hands and Teeth was born from a worry over tuna.


Carrie talks about: Having a fiance who's also a writer and how they work together. (He'll become her husband on April 1!)


Carrie talks about: Her writing process.


Carrie talks about: What she's publishing next -- lots! (Also, Holly does her motherly duties with our adorable unseen audience member.)

Go here for more about Zombies vs. Unicorns, edited by Holly Black and Justine Larbalestier, and with stories by lots of readergirlz faves including this month's featured author, Scott Westerfeld (woo!).

Special treat! Carrie reading from The Dead-Tossed Waves. She gave the audience a choice between Kissy Scene and Zombie Scene, and the audience promptly chose zombies. There's still plenty of kissing in it. :)

Many thanks to University Bookstore for giving us space to talk with Carrie, and for hosting an awesome Zombie Pizza Party with her, even if they might've only been kidding about brains on the pizza. Note the awesome forest/fence scenario they set up for Carrie to read in front of. Also had a soundtrack of waves going.


*****Giveaway alert!*****
Carrie signed a copy of The Forest of Hands and Teeth for one lucky readergirl! Comment on this blog post, and we'll pick a random entry to win!

Check out more of Carrie's blog tour. Here's where she's just been:
The Page Flipper
Through A Glass, Darkly

And here's where she'll be next:
Mundie Moms
Cheryl Rainfield

Also! You can talk to Carrie on www.RandomBuzzers.com, Random House's interactive author site. She'll be answering questions there from tomorrow, Mon, March 22 through Sat, April 2.

So get reading The Dead-Tossed Waves and The Forest of Hands and Teeth, and then get talkin' to Carrie!

You can also friend The Dead-Tossed Waves on Facebook, and view Carrie's book trailers there. Plus, check out www.CarrieRyan.com to learn more, see trailers, visit Carrie's blog and follow her tweets.

Far be it for me to deny you readergirlz anything, so here's the latest Liz with Author photo (slightly modified classic pose). 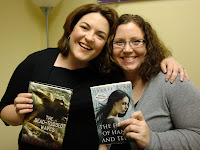 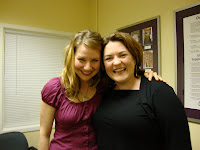 Posted by Liz Gallagher at 9:00 AM

I'm reading The Dead Tossed Waves right now and it's SO GOOD! There's going to be a third in the series?! That just made my life!

Fantastic interviews! Thanks so much for sharing!!!

I'm ashamed to say that I haven't read anything written by Carrie yet although I follow her on Twitter. I actually have The Forest of Hands and Teeth sitting on my shelf, waiting to be read. It's the UK version and I Love the cover art :) Heard great things about the books though, want to read soon!

Nice blog post, like the use of videos :) Thank you for making the contest international, please enter me (lynsey@narrativelyspeaking.com)

I absolutely adored the Forest of Hands and Teeth (I had to bribe my cousin into bringing it back from England for me, at which point he promptly informed me that it was now his FOR KEEPS and I was only allowed to read it once.), but I suppose I'll have to wait for the Dead Tossed Waves to arrive in SmallTownVille, South Africa :-(

I've been hearing an awful lot about The Forest of Hands and Teeth and must say that its definitely piqued my interest. I can't wait to read it!

Both books sound great; I can't wait to read them!

Thanks Carrie for all the insightful information on your writing process. Last year we had to write a short story for english using the writing process of another author. Since then I have always tried to follow the example of each author I admire so as to see if their personal writing process suits me. I have written some strange and wonderful pieces in some of the oddest circumstances. I will definitely be giving yours a try.

I would love to read The Forest of Hands and Teeth! It sounds like a book that my students and I would love!

I LOVE the video interview format. I know you probably can't do that all the time, but do it whenever you can! Love it.

And the clip she read was awesome. I am definitely looking forward to the Dead Tossed Waves. :)

I can't wait to pick up a copy of The Dead Toss Waves!

I love the video format for an interview! Thanks for sharing so much with us.

So exciting!!! Thanks for sharing I love her books!!!

She is made of awesomeness =)! I can't wait to read her books *alannahjavier@gmail.com*

I'd love to win a copy! I haven't read any of the books in the "series" but they all look and sound so intresting!

I would love to win a signed copy! I read DTW and thought it was great, even better than FHT

Thanks for the great interview!

Such a fun interview with Carrie! Thanks to Liz for organizing and galvanizing the troops to welcome Carrie to Seattle.

Fantastic, Holly and Liz. Loved this so much!

I can't wait to read DTW. The Forest of Hands and Teeth was great! It's my favorite post-post-apocalyptic novel.

I would love to read her book! I have heard great things! Thanks for the giveaway!
email bangersis(at)msn(dot)com

A SIGNED copy of The Forest of Hands and Teeth?
Fantastic!
Thanks for sharing!
Love, Hannah S.

The Forest of Hands and Teeth is such a good book. I'm looking forward to reading The Dead Tossed Waves.

I read the Forest of Hands and Teeth and loved it. Can't wait to read Dead Tossed Waves!

I really hope I can get this book! I'm never lucky much so hopefully it shines down on me for this contest!