Rgz SALON member Lyn Miller-Lachmann has been the Editor-in-Chief of MultiCultural Review; the author of the award-winning multicultural bibliography Our Family, Our Friends, Our World; the editor of Once Upon a Cuento, a collection of short stories by Latino authors; and most recently, the author of Gringolandia, a young adult novel about a refugee family living with the aftermath of the Pinochet dictatorship in Chile. The book has had multiple print runs and is available for order. (Don't forget to read the fascinating Cover Story for Gringolandia.)

We're honored to have Lyn here as part of the rgz SALON, a feature where top kidlit experts clue us in to the best YA novels they've read recently. Today, she reviews Irises by Francisco X. Stork (Scholastic): 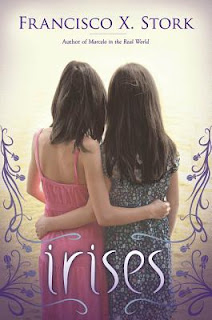 "Eighteen-year-old Kate Romero and her 16-year-old sister, Mary, have helped their father take care of their mother for years, after a car accident left her in a permanent vegetative state. The stress has taken its toll on their father, a Pentecostal minister with an increasingly restive flock. When Reverend Romero dies suddenly of a heart attack, Kate and Mary must take care of their mother themselves. Their financial resources are dwindling rapidly, and the people around them to provide support—Kate’s boyfriend, Simon; their Aunt Julia; and Andres Soto, the ambitious young preacher who intended to replace Rev. Romero even before his death—have their own agendas. When the intellectual Kate spurns Simon’s marriage proposal because she wants to attend Stanford University on scholarship and the artistic Mary falls in love with an unlikely gang member, the girls weigh, in their separate ways, their duty to family against their right to pursue their dreams.

"Stork (Marcelo in the Real World and The Last Summer of the Death Warriors) has proven himself a master of characterization and character development, and Irises—his first novel narrated from a female point of view (though in third person)—is no exception. There is a subtle creepiness in otherwise good people that draws the reader in and doesn’t let her go. Basically, no one is who he or she seems on the surface. A concerned and overwhelmed father turns out to exert a level of psychological control, even beyond the grave, that borders abuse. An ambitious preacher who challenges doctrine and urges congregants to be honest with themselves struggles with inappropriate sexual urges. (Stork’s restraint for this plot thread is masterful.) A resentful, grudging aunt makes a far larger sacrifice for family than she is willing to reveal. The reader senes the competition and jealousies beneath Kate and Mary’s apparent closeness. While Stork doesn’t feel compelled to give his protagonists a happy ending, insight into who they are serves as the first step to genuine growth and maturity." -Lyn Miller-Lachmann
Posted by Melissa Walker at 10:44 AM

This sounds incredible. Thanks, Lyn!

Excellent review. I must read this.