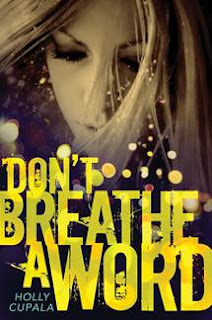 Diva Holly Cupala was here to talk about the cover of her debut novel, Tell Me a Secret. Now, her second novel, Don't Breathe a Word, is out this month, and it has a cover that manages to convey both darkness and sparkle! Here's Holly with the Cover Story:

"After the gorgeous cover HarperTeen put together for Tell Me a Secret, I knew to expect something fantastic for my second, Don't Breathe a Word… though it came about in a completely different (and for me, much more nail-biting) way…

"The original working title was Street Creed, which is what the design team initially had to work with. The first cover concept was… steamy (below). It featured two gorgeous creatures, probably Italian models, who met as if by chance after a swirling, beaded-dress-bedecked night for an almost-kiss. Sigh.

"Don’t Breathe a Word is the story of Joy, who runs away from home to escape an abusive relationship to the streets of Seattle. She finds allies who have secrets of their own, including Creed—a homeless boy who dreams of making it in the music industry.

"There is a steamy relationship (and Creed is swoonworthy!), but there are no beaded dresses. In fact, the only scene where that dress could have appeared was at a fundraiser party where Joy meets her boyfriend Asher—the dark reason she has to leave. Also, I was worried with the final title, it would look like 'Don’t Breathe a Word about that naughty thing we did after the prom.' No. Oh no..."

Read the rest of Holly's Cover Story at melissacwalker.com, and read about her amazing launch contest too!
Posted by Melissa Walker at 4:16 PM

I definitely like the final cover better!!! Although... cute couple!