Cover Stories: The Darlings in Love by Melissa Kantor 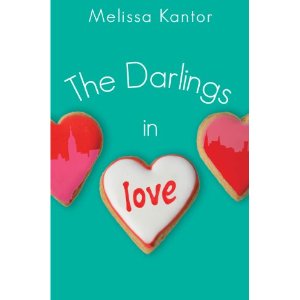 I've got a new copy of Melissa Kantor's The Darlings in Love, and she's here to share the Cover Story! Here's Melissa:

"I had a fantasy of the cover, which might be different from an idea. When I was a kid, there was this book Forever, by Judy Blume. On the cover was a locket with a picture of a girl's face, and when you opened the cover, you saw more of that picture--the girl's whole body, the boy she was standing with, etc. It was this amazing reveal. Well, since pearl pendants play a big role in the story of the Darlings, I wanted the cover to picture a chain with a pearl on it, and when you opened the cover, you saw that the pearl was actually on a girl's neck and that girl was standing with her two best friends. There's a name for that (a cutaway? something like that). But my editor said that covers like that tend to snag and rip and that's a real problem. As happens with so many things in life, reality intruded on fantasy.

"Once the pearl necklace idea was nixed, I think we discussed there being three of something, to symbolize the thee Darlings. The only thing I didn't want was three cupcakes. There are a lot of cupcake covers out there."

"When I first saw my cover, I hated it. I am not exaggerating. I remember calling my editor and making it clear that I was furious. I was like, This is the worst cover! What were you thinking? I hate this cover, etc. She's a very calm, rational person, and she tried to get me to be specific, so I more or less listed everything about the cover (from the font to the color to the cookies) and said why I hated it..."


Read the rest of Melissa's Cover Story at melissacwalker.com.