I'm so excited to welcome Courtney Sheinmel to readergirlz today! I've seen her out and about at various NYC author functions but hadn't "met" her until her fantastic, moving, and oh-so-HOPEful book, Positively, was chosen as postergirlz pick this month. I loved it when I first read it, so I was glad to have the chance to tell her so in "person." 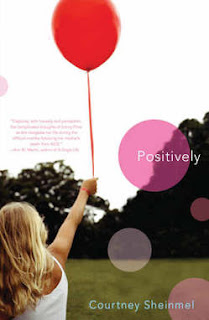 "Emmy is infected with the HIV virus, and her mother, infected before she married Emmy's father, dies of AIDS at the beginning of the book. Angry and alone, the 13-year-old moves in with her semi-estranged father and newly pregnant stepmother. At a loss for how to help Emmy recover from her grief and alienation, they send her to a summer camp for girls with HIV and AIDS. There she realizes that she is not alone, not the only person to take handfuls of pills on a daily basis, not the only girl who worries about the complications of dating with the virus. She returns home with a new perspective, welcoming her half sister into her life and admitting her newfound desire for a happier, more "positive" existence...  Emmy's situation is compelling and underrepresented in YA fiction." -- School Library Journal
Compelling is definitely the right word! Here's what Courtney has to say about hope:
Once when I was fifteen years old I was babysitting for three kids, two girls and a boy.  The boy had HIV, the virus that causes AIDS, and back then, in the early 1990s, that diagnosis was often a death sentence.  The conversation turned to what the kids wanted to be when they grew up.  The boy said he planned to be a baseball player.  I always had hopes his future, and at that moment I truly concentrated on it:  Please, PLEASE let him grow up.
Eighteen years have passed, and he’s a grown up now.  A few weeks ago I had lunch with another friend.  She’s a college freshman and she also happens to have HIV.  We were talking about what she wanted to do with her life.  I was throwing out suggestions and thinking, Oh, please, let her find her way.  Hours later I realized her being HIV-positive didn’t occur to me when we were talking about her future – not once, during the entire conversation.  There was just no doubt in my mind that she does have a future – a long and glorious one – ahead of her.
And that’s the kind of thing that gives me hope, and makes me believe anything is possible.
Thank you so much, Courtney, for visiting with us, for shedding light on an issue that isn't often addressed in children's literature, and for your own irrepressibly positive outlook!
What do you think, readergirlz: when you think of the future, what do you hope for - for yourself, and for others?

That was a lovely post, I loved reading it. Mostly when I look to the future I hope to be a better person. Being only 17 I have a long way to go to find out who I truly am but I sincerely hope its someone my family can be proud of. I also hope my grandparents get better

Hey Monique - it sounds like you have a better sense of yourself than you give yourself credit for! I'm saying a prayer for your grandparents.

Courtney spreads a lot of hope with her books--this is a great post!

I hope to be successful on my own terms and happily making my dreams come true. I hope to be a positive influence on others and inspire them to make the right choices, realize their potential, and pursue their dreams as well.

Thanks for featuring the book this month! And Monique, I hope for your grandparents too.

Such a lovely post, Courtney. Thanks for sharing these moments with us!

I hope for faithfulness to the end. Yep.