Featured Title: THE CHOSEN ONE, by Carol Lynch Williams

Hello readergirlz! Here's hoping that everyone had a relaxing holiday season and is feeling cheery and bright-eyed about the new year. No wonder January's theme, Hope, seems particularly relevant during a season of fresh starts, resolutions, and new beginnings.


I'm thrilled to kick off our January title features with Carol Lynch Williams' tense, gripping, and oh-my- goodness-yes, uplifting, The Chosen One. Carol is a fellow Vermont College alumn, and I've been one of her biggest fans since, oh, just about the moment I first met her. 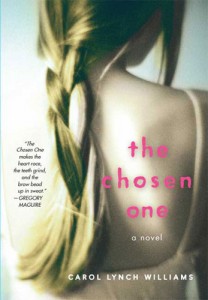 Taking a story “ripped from the headlines,” Williams looks inside a polygamist cult and the dangers it poses for one girl. Kyra and her father, three mothers, and 20 siblings live in an isolated community under the thumb of a prophet, who controls every aspect of his apostles’ lives. The most shocking intrusion of all comes when the prophet decrees that Kyra is to become the wife of her 60-year-old uncle. A secret patron of a local mobile library, Kyra knows there’s a world away from the compound she might escape to, but first she pins her hopes on her father’s ability to change the prophet’s mind. Instead, her family is threatened, and the stakes for her refusal to marry are raised. Williams’ portrayals of the family are sharp, but what’s most interesting about this book is how the yearnings and fears of a character so far from what most YAs know will still seem familiar and close.--Booklist


I'm so excited to have Carol here with us today, talking about hope:


What a lovely opportunity to have readergirlz think of my novel The Chosen One. It is such a nice honor. Thank you, Girls!

It seems most of my life I hang on to hope by the tips of my fingers. Yes, I tend to be a little down, a little depressed. It’s a hard way to live.

But I do have hope in my life. My amazing editor for The Chosen One is named Hope. When I start to leap off the deep end, she’s there to stop me or throw me a rope if I’ve already taken the plunge.

In my book Glimpse, the main character is named Hope. She started out something else (I can’t remember what) but the name Hope kept pressing in on my brain. And the truth is, later I saw she was her sister’s hope. So it worked out for me as a writer.

And in The Chosen One, Kyra, the main character, finds out what it’s like to have hope, lose hope and find the tendrils of belief again so she has something to hold on to.

Hope is something we all deserve. It shouldn’t be taken from us by bullies at home, at school or on the street. It’s a gift, like agency.

Just recently (after several very sad things that happened) I discovered something. I was wandering around feeling awfully hopeless. And I was doing quite a bit of whining (those two go hand in hand for me--hopelessness and whining). It just so happened that while the sad stuff was going on, I had started a new novel about grief. That means I was whining, writing and wandering about (the 3 Ws). I couldn’t get away from the grief. I kept asking “Why?” (Another W word!)

And that’s when it came to me. It was kind of like a slow burn--I had this bit of an idea that unwrapped itself slowly and left me with something I felt--even in my saddened state--I could live with. It was how to generate more hope.

I realized something you all probably know: that hope for other people might be influenced by me. We can actually help someone feel better. When we’re a friend, when we’re kind, when we look to the welfare of others (and I don’t mean financially)--we make a difference. We create hope. We create change.

What happened after that was a subtle shift inside of me. When I looked away from my sorrow and offered hope to others, I felt better. All the pain hasn’t gone away, but I started feeling a  bit of comfort.

Hope means we care for others and then it’s like we get a gift all for ourselves--and the world gets that much better. Just because of a choice. A decision.

This is my biggest discovery this year: Life isn't fair and it never will be--but we as good people can make it easier. And that’s what I set out to do in 2011. I hope you join me.


Carol Lynch Williams is the author of more than 20 books for middle grade and young adult readers including Pretty Like Us, The Chosen One and Glimpse. Her newest novel comes out in March 2011 and is called Miles from Ordinary.  Carol has an MFA from Vermont College but the best parts of her life are her five beautiful daughters. Visit Carol at www.throwingupwords.wordpress.com where she shares a blog with Ann Dee Ellis, Ally Condie, and her daughter Kyra Leigh.

What a beautiful post, Carol! Thanks so much for joining us. I do find that when I'm feeling my most hopeless or down, it's invigorating to try to reach out to others - not in the expectation that they will comfort me, necessarily, but that by giving of myself to someone else, I'm reminded of my own value, and putting good karma out into the world. What a wonderful message on which to embark upon a new year!
So readers - how do you find hope in seemingly hopeless situations?

Welcome to readergirlz, Carol! Thank you for sharing hope with us. I see hope and share hope and feel hope every day. I wish you well.

I loved The Chosen One (even as it terrified me and broke my heart) and I love this guest post. Thank you, Carol! I can't wait to read more of your books, now.

I am reading THE CHOSEN ONE right now; I just adore it. Reading stories with hope in them spreads a little into my own life!

Don't we love strong characters? Kyra finds hope in books, self-reflection and action and so do I. I loved The Chosen One!

Thank you for sharing these personal thoughts, Carol. So touching.

And your editor is named Hope. I love that.

Thanks for the comments, Everyone.
I agree with strong female characters=great!

I often wondered what made most girls stay in this kind of home life and the very few run? "Religion' plays a huge part, of course.

So how do those few girls get the courage?

I think the idea of being shunned by your family, even an imperfect one, is paralyzing in its terror. They're the world you know... and outside hope is one thing that can pull you away, but family is a very strong counter-pull.