And here's a report from our Author in Residence, Beth Kephart! 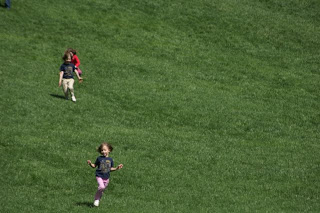 For the third Readergirlz contest, writers were asked to choose a photograph of themselves at a turning point in time. They were then to write of that moment in present tense. They were next to take that moment and recast it in past tense. Finally, they were to reflect on what each tense made room for in terms of storytelling.

Our winner is Kiera Ingalls, 17, of Wayne, PA, who did a masterful job of twice telling a wild turkey story and reflecting on what the exercise yielded. We had two runners up: Carly Husick and Lucia Anderson. Kiera wins a signed copy of Nothing but Ghosts, and I replay her entry in full here. Look for the fourth and final readergirlz writing contest tomorrow; the winner of that contest will receive an advanced reading copy of The Heart is Not a Size.

I follow my brother’s quick steps in the dewy grass to the roaring creek. The slime of salamanders lingers on my small fingers as I rub the bumpy skin of a toad. My brother Roscoe starts to meander towards the woods. Quickly following him I make sure not to drop the fidgety toad that I cusp in my hands. Under the tree cover there is a myriad of vibrant green “monkey brains”. I pick one up and the citrus scent wafts right up to my nose. From the corner of my eye sudden movement catches my attention. I drop the monkey brain as Roscoe dashes after a wild turkey. He lunges at it once only brushing the tail fathers. He sprints up again making another attempt this time acquiring a feather. With another grab the agitated turkey turns around and bites Roscoe. My brother stops, allowing the wild turkey to fade into the distance. I approach my brother and after seeing that he still has all of his fingers we take our time back home. Looking down my brother faintly knocks on the heavy mahogany door. My mother slowly opens the door appearing disgruntled. I gaze up extending my arms in front of me to expose my bumpy finding to mommy. In return she extends her accepting arms to Roscoe and I for a hug, and in relief we leap into them.

We jumped in the creek looking for slimy squishy creatures and we walked through underpasses beneath major roads. Wandering through the woods my brother, Roscoe, and I discover fox skulls and fragrant Osage Oranges. As we started back to the house Roscoe spotted a wild turkey and decided he would try to catch it. I’m not sure if he intended to have it for dinner, considering he was a very picky eater and would only eat turkey and lettuce sandwiches for some time, or if he wanted to domesticate it as a pet. Nevertheless, he was chasing the poor animal and grabbing at its feathers. I t must have been Roscoe’s second or third attempt to grab at the turkey, so it turned around and bit him. At that moment Roscoe decided it was time to head home. We hesitantly knocked on the front door and our disappointed mother answered. Although she was greeted by two once clean children that were now soaked, covered in mud, infested with ticks and most likely infected with giardia-- presenting fox skulls, toads and Osage Oranges-- she still accepted us with open arms and a smile.

Writing this event in present tense following with past tense revealed to me the humor of the event that was unfathomable at the time it happened. In general this process allows for interpretation of a past situation with the end result presenting intriguing differences. In my story for example the present tense introduces apprehensive characters and the past tense illustrated a couple of fearless pioneers.

Posted by Lorie Ann Grover at 8:49 AM