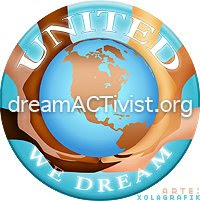 All over the country, young students are being forced to give up on their dreams of a college education because of their immigration status. Many states deny in-state tuition benefits to students who entered the U.S. illegally, even if they've been here since they were young and have spent their entire school lives in America. This is an issue that our featured book, Red Glass, touches upon. And it couldn't be more timely.

Right now, Congress is considering The Federal DREAM Act (Development, Relief, and Education for Alien Minors Act), which would provide undocumented immigrant youth in America with conditional residency and a chance for citizenship if they came to the U.S. before they were 16, graduated from high school or obtained a GED, attended two years of college or joined the military, and have no criminal records.

If the act doesn't pass, "another entire class of outstanding, law-abiding high school students will graduate without being able to plan for the future, and some will be removed from their homes to countries they barely know," says DreamACTivist.org on its site, which is dedicated to the passage of the DREAM Act. "This tragedy will cause America to lose a vital asset: an educated class of promising immigrant students who have demonstrated a commitment to hard work and a strong desire to be contributing members of our society."

Want to take action? Here are some ideas.

Posted by Melissa Walker at 4:24 AM

Email ThisBlogThis!Share to TwitterShare to FacebookShare to Pinterest
Labels: dream act, May, reach out

This is so, so important! The NY Times has been doing a great series on immigrants called "Remade in America" and it's really opened my eyes to this issue: http://projects.nytimes.com/immigration/