Our lovely Seattle Host Liz Gallagher is back, bringing us to two awesome events. Take it away, Liz:


Here in Seattle, Labor Day weekend means Bumbershoot, a giant festival that surrounds the Space Needle for three days. Most people probably think of it as a music festival—and it does draw awesome bands—but Bumbershoot is also about all sorts of arts, including the literary.

I spent this weekend basking in the bright light of literary events, even as the Seattle sky unpredictably (for this time of year!) supplied more than a few raindrops.

On Saturday, I went to Writers in the Schools: Youngheads vs. Oldheads. Way less violent than it sounds, this smackdown pitted teachers in the Seattle Arts & Lectures Writers in the Schools program against their students in a battle of words. The audience was also treated to an impromptu science experiment/poetry exploration with the Vis-a-Vis Society, a group that conducts “poetic explorations of the everyday.” Basically, that means they hand out surveys with oddball questions, the audience answers, and the labcoat-wearing poets in the Society tabulate the findings. We, as a group, were deemed to be most like a blackberry bush. 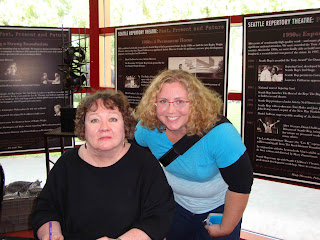 Sunday was a day that made me shake with excitement. For serious. SE Hinton came to the festival (left)!

She’s the author of The Outsiders; she also wrote several other YA novels, an adult novel, two books for younger kids, and a collection of linked short stories. To us YA writers, she’s a major rockstar. Some say she created the whole genre of YA lit, and—as if that weren’t already enough to celebrate about her—she wrote The Outsiders when she was only seventeen. Proof of teenage awesomeness.

She told stories about working on the movie versions of some of her books, and I’m so excited to check out the DVD release of The Outsiders: The Complete Novel. Ms. Hinton talked about how the first version of the film (released in the early eighties) was cut by the studio and lots of important scenes disappeared. For the 2005 complete version, everything was restored just how director Frances Ford Coppola and SE Hinton herself wanted it, so the movie is rich with character and motivation, just like the book. The DVD also includes interviews about the making of the film, and judging from the few I heard on Sunday, I know there are lots of exciting stories-behind-the-story. 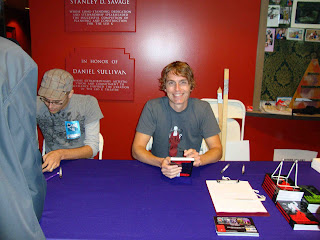 As if that wasn’t enough literary excitement for one weekend, on Monday I checked out an event called Vampires and Robots with Kevin Emerson and Daniel Wilson.

Kevin writes the middle grade serious Oliver Nocturne, about a Seattle vampire boy, which are serious fun for all ages (well, nine and up, say), and Daniel is a robot enthusiast from Portland (he has a Ph.D. in the subject!) who’s titles include How to Build a Robot Army, Where’s My Jetpack?, and How to Survive a Robot Uprising. Kevin sang a “middle grade pop song” about Oliver and his human friend Emilie and their complicated relationship, which is really very similar to the relationships of most seventh graders . . . if you forget about the whole vampire problem. The guys read from their work and debated who would win in a fight between a vampire vs. a robot. No definitive conclusion was reached. They were both kind of polite debaters, actually, pointing out the other side’s strengths. What do you want with you in a fight: vampire or robot?

Overall, it was a great weekend that left me excited to read. I got to meet lots of other readers, too, and we Seattlites have lots more events coming up. Among others that I’m excited about:

Join me if you’re in town!
Posted by Melissa Walker at 6:10 AM

Thanks for the recap, Liz! Sounds like you had a blast at Bumbershoot, especially meeting S.E. Hinton. The Oliver Nocturne serires is cute.

SO jealous that you met SE Hinton! Must get that DVD with the deleted scenes!!!