Where I was tonight: Secret Garden Books

Who I was there to see: Frank Portman

What I’m proud to own: Frank’s books! King Dork and the shiny new one, Andromeda Klein 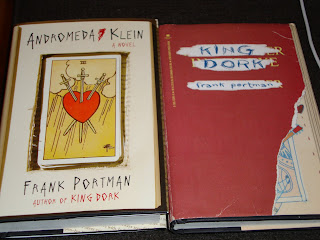 Why you should check out the hardcover of Andromeda Klein: The inside of the book jacket has this amazing occult-type chart that Frank had to track down in very complicated ways involving an uber-rare copy being photographed by a student in North Carolina. Frank’s devotion to authenticity and research is obvious as soon as you start reading this book – which I just have. It’s very, very thoroughly detailed and thought out. If you have any interest in tarot and magic, you will love it.

What Frank did on stage: Sang! Played guitar! Thrilled the crowd! In addition to being a hilarious, smart, thorough novelist, he’s in the punk band The Mr. T Experience. Hear his Andromeda Klein theme song here. 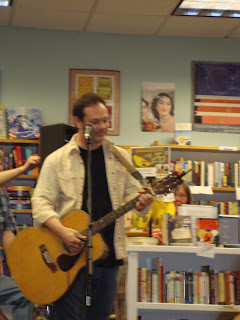 Who’s that peeking out from behind the Bananagrams? It’s the Christy, owner of The Secret Garden. Ooh, and there was a big display of Graceling right next to Frank. Very appropriate for this month, eh, readergirlz?

What Frank said about future Mr. T Experience music: It’s hard to be a rockstar and an author all at once. Maybe some people can do it. As Frank said, “If, like, Isaac Asimov had a punk band, maybe he could.” The band is still together, and he loves recording music, but Frank Portman is not Isaac Asimov. Which is fine by me, because I like Frank’s books just the way they are. His tunes, too.

Here's me with Frank: 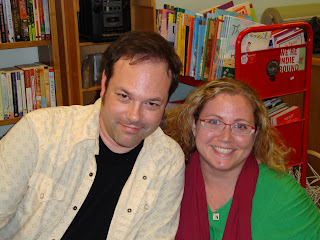 What I have to say about this experience: Yay!

Posted by Melissa Walker at 5:48 AM

Sounds like you had a great time, Liz! I am so not singing at my signing, but yay for Frank!

This is an above and beyond moment for Frank--how cool!