On Saturday, an enthusiastic crowd gathered at Secret Garden Bookshop to celebrate the release of Fade to Blue by Sean Beaudoin. 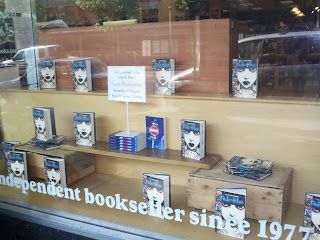 Look at that amazing cover!

I got there early and had a fun time chatting with the shop’s owner and buyer about all of the books we’ve been reading, the crazy 100-degree heat we’ve been having, how awesome Sean’s cover is, and especially how excited we are that Sean and his family have moved to Seattle. Yay! I have a feeling this is one YA author you’ll be seeing lots of all over the place, and we’re super-happy to have him as a neighbor here in the Emerald City.

The guest of honor himself soon arrived . . . 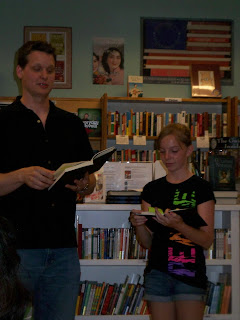 He entertained with funny bits about how Fade to Blue came to be, including the original title (Sour White! It’s a soda the characters drink.) and many hilarious replacements he thought of before landing on Fade to Blue.

Then he and a thirteen-year-old friend (pictured above!) treated us to a reading from the book. It soooo made me want to dig in right there. 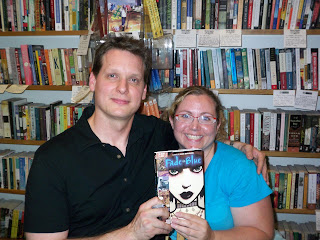 My copy’s waiting, but it shan’t remain un-read for long.

So, what’s the story about, you ask?

Well, as Sean told us at the event, that’s a tricky question, to which he gave a very eloquent answer, which I can only sum up by saying it’s about an unlikely friendship, but it’s also about ice cream trucks and mystery and insanity. Here’s a quote from the book’s flap copy: “Sophie Blue and Kenny Fade don't have a thing in common. Aside from being reasonably sure they're losing their minds.”

Sean’s also the author of Going Nowhere Faster, and he said that people always ask him if the main character in that book IS him, and he can’t get them to believe that it’s FICTION, so he wanted to write a character completely different from himself. Enter Sophie Blue, who I can’t wait to fall in love with.

Sean will be touring cities far and near this fall, including more appearances in Seattle, so keep your eye out for the chance to meet him!

Oooh, how cool is that. It looks like fun! Thanks, Liz!

That really is a great cover!

Thanks for the recap, Liz - and hi, Sean!

HI Liz. I'm Liz too! I got a chance to read this book already! I can't wait to read about your reaction to it. Check out what I had to say
http://alilsumpinsumpin.blogspot.com/