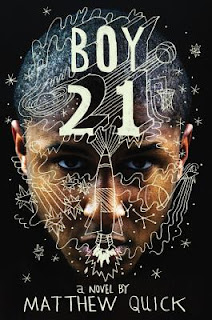 Matthew Quick is here to talk about the cover of his latest (and incredibly great) novel:

"When I saw the design, I yelled, 'YES!' Alicia [his wife] came running into my office to see why I was yelling, looked at the image on my computer screen, and said, 'That's so much better than what you pitched them. That cover is amazing! Amazing!' It was a happy day.

"At one point they changed the photo of Russ, who is depicted on the cover. The photo they swapped in featured an older-looking teen who appeared harder and maybe even menacing. It didn't look like Russ at all. I immediately wrote an e-mail explaining why the original photo captured Russ perfectly. The teen on the cover now has an intensity--especially if you look into his eyes--but he also looks a little vulnerable and as if he would be a complex person. Russ is a very complex character, who is troubled, but is also wise and compassionate and intuitive. I believe there was a meeting regarding which photo to use and, happily, everyone at Little, Brown agreed..."

Read the rest of Matthew's Cover Story on melissacwalker.com.

Posted by Melissa Walker at 8:22 AM

Congrats, Matthew! The cover is awesome and video super cool. Way to go! Can't wait to read it!