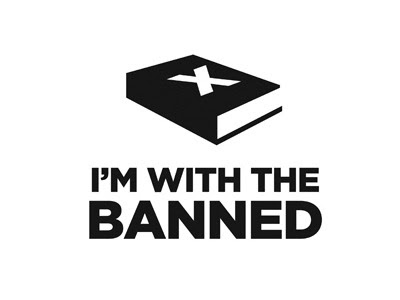 
Banned Books Week is the national book community's annual celebration of the freedom to read. Hundreds of libraries and bookstores around the country draw attention to the problem of censorship by mounting displays of challenged books and hosting a variety of events. The 2012 celebration of Banned Books Week will be held from September 30 through October 6. Banned Books Week was launched in 1982 in response to a sudden surge in the number of challenges to books in schools, bookstores and libraries. More than 11,300 books have been challenged since 1982. [...] According to the American Library Association, there were 326 challenges reported to the Office of Intellectual Freedom in 2011, and many more go unreported.

For example: To Kill a Mockingbird by Harper Lee was #10 on the list of most challenged titles of 2011. The Hunger Games trilogy by Suzanne Collins was #3. For example: Alice's Adventures in Wonderland, Charlotte's Web, and Winnie-the-Pooh have all been challenged or banned because they include animal characters that use human language. In honor of Banned Books Week's 30th anniversary, ALA has created a timeline of significant banned and challenged books. Attention booksellers and librarians: Get your camcorders ready so that you and your patrons/students can participate in this year's Virtual Read-Out! Learn more about it here and here.

Related Posts at my blog, Bildungsroman:
I Read Banned Books: Celebrating Intellectual Freedom and Literacy
They Tried to Ban This Book Today, or, There's a Sticker on the Cover of This Book - inspired by the challenge of Just Listen by Sarah Dessen
The Bermudez Triangle by Maureen Johnson: Too Cool for School?

Posted by Little Willow at 8:50 AM