Rgz SALON member Lyn Miller-Lachmann has been the Editor-in-Chief of MultiCultural Review; the author of the award-winning multicultural bibliography Our Family, Our Friends, Our World; the editor of Once Upon a Cuento, a collection of short stories by Latino authors; and most recently, the author of Gringolandia, a young adult novel about a refugee family living with the aftermath of the Pinochet dictatorship in Chile. The book is in its third print run and is available for order. (Don't forget to read the fascinating Cover Story for Gringolandia.)

We're honored to have Lyn here as part of the rgz SALON, a feature where top kidlit experts clue us in to the best YA novels they've read recently. Today, she reviews This Thing Called the Future by J.L. Powers (Cinco Puntos Press, 2011). 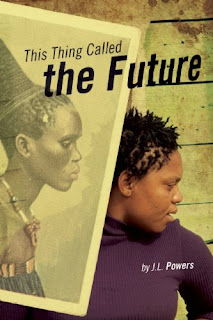 "Growing up in a shantytown in today’s South Africa, 14-year-old Khosi Zulu rarely sees her mother, a teacher in a distant town, or her father, who lives with his mother even farther away. She is shocked, therefore, when her mother returns to the shantytown after a two-month absence, wasted and coughing blood. Although Khosi’s mother shuns traditional healing in favor of modern medicine, she refuses to visit a clinic for medicine because she doesn’t want to find out that she has AIDS. Schooled in traditional medicine by her Gogo (grandmother) and the neighborhood healer, Khosi wants to be a healer herself, a mission reinforced by her regularly occurring dreams and visions; yet to achieve this aim, she has to stand up to a witch who has cursed her, a drunk man who harasses and beats her because she won’t let him be her 'sugar daddy,' and a neighbor who accuses Khosi’s mother of stealing her insurance money and threatens revenge. In addition, Khosi has promised her mother she will become a nurse and leave South Africa, and the act of choosing between healer (the past) and nurse (the future) means showing disrespect to at least one of her ancestors.

"Powers seamlessly combines contemporary realism with the supernatural in this powerful and singular novel for readers in middle school through adult. The story is grounded in Zulu beliefs, legends, and folk traditions, giving Khosi’s dreams and the interventions of her ancestors a level of believability that most contemporary realistic novels with a fantasy component lack. Furthermore, the dreams are relevant to the story events, and all of the scenes, whether realistic or supernatural or morphing from one into the other, tie into the central theme of how respect for ancestors can guide a young person toward the future. While maintaining her central theme as the focus throughout, Powers builds tension and interest by raising the stakes through the three pursuers of Khosi—the witch, the drunk, and the vengeful neighbor—her mother’s physical decline, and the life-threatening purging ceremony that Khosi and her Gogo endure in hopes of saving Khosi’s mother." -Lyn Miller-Lachmann
Posted by Melissa Walker at 7:12 AM

I'm so glad Lyn finds and highlights these great works for us!