Rgz Street Team: Enna and Priya Review My Soul to Save by Rachel Vincent

Today, both Enna and Priya review My Soul to Save by Rachel Vincent (read the Soul Screamers series Cover Stories here!):

Enna's review:
"This book was pretty good, when it wasn't focusing on the sexual tension between the two main characters. Whenever it got to those parts I just found myself skimming. Luckily, it wasn't a HUGE part of the book, though it was prevalent.

"Another thing that bothered me was what they called the banshee's bean sidhes. But I don't really want to talk much about that, since I understand why the author wanted to do it.

"But, all in all, those were the only things that bothered me. I liked the story, but didn't love it. It's nothing that will WOW you, but it's not bad either. Note that it is about demons and death, and I know that bothers some people. 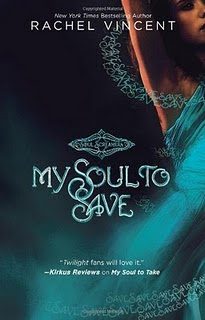 "It worked really well as a stand-alone book. This is the second in a series, but I didn't feel like I was missing anything (I haven't read the first). That's one of the biggest compliments I can give to a book." --Enna

Priya's Review:
My Soul to Save (the sequel to the thrilling novel My Soul to Take) is book 2 of the Soul Screamer series. As the synopsis says, "When Kaylee Cavanaugh screams, someone dies." However, when a pop star dies onstage at a concert and Kaylee doesn't scream, she knows that something's wrong. She soon finds out that several girls are giving up their souls in order to achieve fame - even though they'll be forced to spend eternity in torture. With a few friends, Kaylee embarks on a journey to get the girls' souls back and find out who's behind this soul trade. (Go here for the official synopsis.)

"My Soul to Save was a fantastic sequel, full of action, suspense, and great characters. The writing was fast-paced and descriptive, and the plot was exciting. Although I felt like Kaylee had a little too much luck in some places (whenever she's in trouble, something always comes up to get her out of it), overall, I enjoyed this book very much. It's labeled as paranormal, but it's much more than that - I would definitely check it out if I were you!

"Here's the book trailer for My Soul to Save.

"You can also learn more about Kaylee by downloading the free Soul Screamers prequel My Soul to Lose here!" --Priya
Posted by Melissa Walker at 1:40 PM

Nice idea having two different reviews of the same novel. I think that I will check it out thought I haven't yet read the first one. There always seems to be so many books coming out at the same time all that I want to read. Its hard keeping up!

I love the two takes on the book--thanks, guys!