Rgz Salon: My Book of Life by Angel by Martine Leavitt, Reviewed by Lyn Miller-Lachmann

Rgz SALON member Lyn Miller-Lachmann has been the Editor-in-Chief of MultiCultural Review; the author of the award-winning multicultural bibliography Our Family, Our Friends, Our World; the editor of Once Upon a Cuento, a collection of short stories by Latino authors; and the author of Gringolandia, a young adult novel about a refugee family living with the aftermath of the Pinochet dictatorship in Chile. Her most recent novel, Rogue--a spring/summer Junior Library Guild selection for middle school--is out in May.

We're honored to have Lyn here as part of the rgz SALON, a feature where top kidlit experts clue us in to the best YA novels they've read recently. Today, she reviews My Book of Life by Angel by Martine Leavitt (Margaret Ferguson Books): 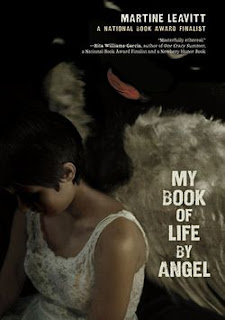 "Angel’s friend Serena used to attend church every Wednesday night, where she would welcome the homeless men nobody would go near—just as she tried to protect Angel when their pimp, Call, and the other men abused her. Now Serena has disappeared along with dozens of other sex workers in Vancouver’s Downtown Eastside. When Serena vanishes, 16-year-old Angel starts her 'book of life' where she describes how she ended up addicted to heroin and selling her body for Call, initially believing him to be her boyfriend and then too dependent on him to escape. With Serena still missing, Angel slides into despair until 11-year-old Melli arrives and she realizes she must become stronger than Serena ever was if she wants to save Melli. Defying Call may put her single father and her beloved younger brother at risk. However, if Angel’s own faith is strong enough, and if she can endure the painful process of kicking heroin, she may be able to plot a way out for both her and Melli.

"In powerful verse, Leavitt gives voice and dignity to the young women, many of them teenagers, who work in Vancouver’s notorious sex trade. Since 1983, more than 65 female sex workers in this Canadian city have disappeared or been found dead, most of them traced to a serial killer arrested in 2002. Leavitt’s effort to learn about these women and to honor their lives has resulted in this eloquent and memorable story of a young woman who, through her courage and her desire to be heard, becomes more than the bleak circumstances of her existence.” -Lyn Miller-Lachmann
Posted by Melissa Walker at 11:57 AM

WE ARE HIRING NEW LIVE CAM MODELS!
EARN UP TO $10,000 PER WEEK.
REGISTER AS A BONGA MODELS WEBCAM MODEL TODAY!