Hello readergirlz!
Today's Featured Title is the very last of February, and our theme of Loyalty. I'm so happy to be going out with a bang via one of my all-time writer heroines, Laurie Halse Anderson, and her book, INDEPENDENT DAMES: What You Never Knew About the Women and Girls of the American Revolution. 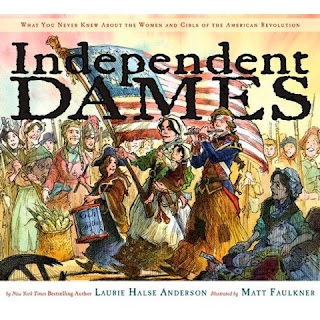 Listen up! You've all heard about the great men who led and fought during the American Revolution; but did you know that the guys only make up part of the story? What about the women? The girls? The dames? Didn't they play a part?
Of course they did.


Here's what Laurie has to say:


Remember the Ladies Or Else!
Too often our understanding of the American Revolution comes bowdlerized by Victorian-era sentiments. This is why we’ve misunderstood the role of women during the Revolution for so many generations.
Women were a vital part of the founding of the United States. Their participation ran the gamut: from taking over businesses and farms, to organizing and participating in boycotts, raising money, spying, smuggling, fighting, healing, feeding, and weaving a ocean’s worth of home-spun fabric. And they did it wearing long skirts that usually had a few kids clinging to them!
Staying home to knit? Not so much.
My favorite dame in the book is 9-year-old Susan Boudinot, who, when served tea at the mansion of the royal governor of New Jersey, tossed the foul beverage out the window. And then there was Elizabeth Burgin, who helped 200 POWs escape from their prison ships in the dead of winter. Gumption!
Juggling the layers of storytelling in DAMES; the narrative, the speech bubbles, the mini-bios, the time line, and the back matter sometimes made it feel like I was writing an epic novel instead of a picture book. But when I saw Matt Faulkner’s sketches of my clever and stubborn dames, everything fell into place.
When you pick up DAMES, be sure to check out the acknowledgements page. There you’ll find the names of 22 women – all of them grandmother of mine -  who lived during the Revolution. Being able to share the stories of their world with today’s readers gives me goosebumps!
Ooh, I've got goosebumps now, too! Here's a pic of Laurie at a Valley Forge reenactment. Love her commitment to research (it also looks like she's having a darn good time)! 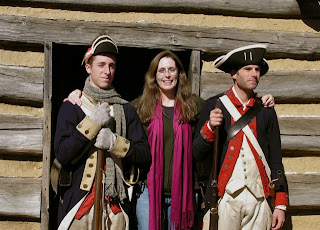 Want to learn more about DAMES? Catch the snazzy book trailer:
Thanks so much for joining us, Laurie! And thanks for being so committed to stories about strong, complicated women!

I heart Laurie and can't wait to read DAMES. Woot for truth!

I second that, LA!

So glad this book exists! About time!