Featured Title: IF I STAY, by Gayle Forman

What would you do if you had to choose? 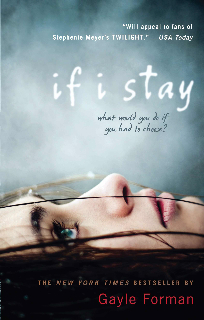 The last normal moment that Mia, a talented cellist, can remember is being in the car with her family. Then she is standing outside her body beside their mangled Buick and her parents' corpses, watching herself and her little brother being tended by paramedics. As she ponders her state (Am I dead? I actually have to ask myself this), Mia is whisked away to a hospital, where, her body in a coma, she reflects on the past and tries to decide whether to fight to live. Via Mia's thoughts and flashbacks, Forman (Sisters in Sanity) expertly explores the teenager's life, her passion for classical music and her strong relationships with her family, friends and boyfriend, Adam. Mia's singular perspective (which will recall Alice Sebold's adult novel, The Lovely Bones) also allows for powerful portraits of her friends and family as they cope: Please don't die. If you die, there's going to be one of those cheesy Princess Diana memorials at school, prays Mia's friend Kim. I know you'd hate that kind of thing. Intensely moving, the novel will force readers to take stock of their lives and the people and things that make them worth living. -- Publishers Weekly, starred review


I read IF I STAY in one breathless night during my last semester of graduate school in writing. "Research," I told my advisor; specifically, research on how to create a tone of hope and uplift in the midst of a tragic scenario. And isn't that the very definition of resilience, after all?


I can't say that I've been able to replicate Gayle's pitch-perfect portrayal of strength in the face of overwhelming grief in my own work (though I do still aspire!), but hearing her speak specifically to her own experiences with resilience is as inspiring as her beautiful writing:


I often say that Mia, the heroine of If I Stay, is much more mature than I am. When her voice popped in my head and then onto my computer screen, at first I was like: Who is this person? She seemed so much more worldly wise than me. I still talk like a Valley Girl. I couldn’t believe I had this girl inside of me—or what I put her through:

Mia is in a terrible car accident that, by page 16, kills her parents and gravely injures both her and her little brother. For the duration of the book, she finds herself separated from her body, watching, as doctors try to save her life, as relatives, loved ones, and her boyfriend, Adam, come to her side. She comes to realize that it’s her choice whether to stay—live—or not.
Mia is 17-years-old. I gave this burden to a 17 year old. And don’t think I didn’t feel bad about it. While revising, I had to add a moment to the accident scene when Mia recognizes the horror of what has happened and I cried for her, for what I knew was awaiting her in the coming pages.
But the thing with Mia is, in addition to being more mature than I am, being a far better musician than I am, having a way hotter boyfriend than I ever did in high school, she has something else on me, too. Mia is resilient.
Readers often ask me what I would do in Mia’s shoes. Would I choose to go with my family or would I choose to stay? My initial response is that I’d want to go with my family—my husband and kids—but the thing with resilience, as Mia discovers, is that it’s a muscle you never use until you need it. You never know if you have it until you’re tested.
I didn’t lose my family in a car crash, but I did lose four very close friends in a car accident on a snowy Oregon road. If someone had told me before that this would’ve happened, and I would survive it, grow from it—and here’s the shocker, still remain close to my dead friends, feel closer to them than ever by writing a book inspired by them seven years after the fact—I never would thought it possible.
Maybe I am a little resilient. Maybe I have a little more of Mia in me than I thought. 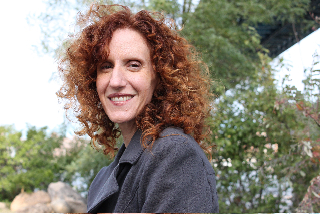 Thank you so much for sharing Mia with us, Gayle. May we all take some of her strength when we're tested.
So readers, what we want to know is, are their characters (in literature or elsewhere) that you turn to for strength during difficult times? Who are they, and why?

Email ThisBlogThis!Share to TwitterShare to FacebookShare to Pinterest
Labels: featured title, gayle foreman, If I Stay

I love this cover!

I know, the hardcover was great, but I'm totally in love with the paperback version, too.

what a beautiful post! thank you for sharing, Gayle.

I have to say I will turn to Mia for resilience. She is my all time favorite fighter.

That such a great feeling/awesome quality to find in a literary character - someone you can turn to to inspire you in your own life!

Girls love this book in my library. It has remained popular for two years.

Yep, it's definitely popular - and with good reason! Glad to hear it's in demand in your library!

Thumbs up for If I Stay. This book is a page-turner, compelling you to keep reading in order to find out what happens to Mia.

My favorite literary characters are strong and resilient, such as Alice from Alice in Wonderland and Jenna Blake from the Body of Evidence series of books by Christopher Golden.

Thank you, Gayle, for sharing the backstory of IF I STAY. I'm thankful you've found comfort after their loss, and you feel close to them even now. That is resilience!

Thanks everyone, for your comments. I was a little reluctant to share that story, to share the backstory at all. You see, the superstitious side of me is like: don't say you found the stronger side of yourself through this—you're just asking for trouble.

See how crazy I am?

Then again, the plus side of outing yourself is all the wonderful supportive things people say.

Also, you inadvertently find out that other writers are just as crazy and weird with their superstitions.

Anyhow, I will be thinking of all this as I contemplate all that I'm grateful for.

If I Stay is moving, touching and beautifully written. It's so gripping that you have to read all two hundred and seven pages in one go, and is sure to be one of the year's most talked about releases. With brilliant characters that easily come to life, as well as a story so memorable and meaningful, I'd say that Gayle Forman is well on her way to Alice Sebold-like superstardom.