Rgz SALON member Lyn Miller-Lachmann is the Editor-in-Chief of MultiCultural Review; the author of the award-winning multicultural bibliography Our Family, Our Friends, Our World; the editor of Once Upon a Cuento, a collection of short stories by Latino authors; and most recently, the author of Gringolandia, a young adult novel about a refugee family living with the aftermath of the Pinochet dictatorship in Chile. (Read the fascinating Cover Story for Gringolandia.)

We're honored to have her here as part of the rgz SALON, a feature where four of the top kidlit experts clue us in to the best YA novels they've read recently. Today, Lyn reviews Shine Coconut Moon by Neesha Meminger (Simon & Schuster/McElderry Books, 2009).

"During the holiday season we observe our own religious traditions and learn about the traditions of our neighbors. Christmas, Hanukkah, and Kwanzaa receive attention in schools and from publishers releasing holiday books. As the Muslim population in the United States and Canada has grown and become more visible, readers learn about the major Muslim holidays (which follow the lunar calendar and do not necessarily fall in December).

"Although Sikhism is centuries-old religion with more than 23 million followers, and Sikhs have lived in the United States for at least 130 years, few people know about this faith tradition and its followers, now numbering over 650,000 in the United States. Because observant Sikh men wear turbans, many were targeted by vigilantes after September 11, 2001. 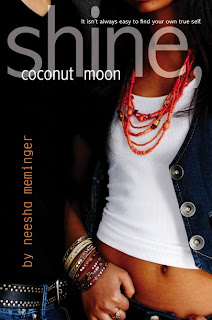 "In Shine Coconut Moon, Meminger does an admirable job of weaving information about Sikh Americans into a fast-paced story featuring characters whose struggles will engage teenage girls regardless of their heritage. Seventeen-year-old Samar (Sam) Ahluwahlia lives with her single mother and hasn't seen her grandparents or the rest of her Sikh-American family since she was three years old, even though they live an hour and a half away in suburban New Jersey. Like her mother, Sam has vigorously sought to assimilate into mainstream U.S. culture, prompting a classmate to call her 'coconut'--brown on the outside and white on the inside. Shortly after the 2001 terrorist attacks, Sam's Uncle Sandeep, her mother's younger brother, shows up at her house, seeking to reconnect with her and her mother. Sam, who has always longed for the large, close family that her best friend Molly enjoys (even though Molly has warned Sam that her large family sometimes drives her crazy), grows close to Uncle Sandeep despite the objections of her mother.

"Sandeep, who wears a turban, becomes the object of suspicion because of his appearance and dress. At Molly's house, he attracts stares, which drives a wedge between Sam and her best friend. Even worse, Sam's white boyfriend, Mike, looks at Sandeep and sees 'Muslim terrorist,' and some of Mike's friends pelt Uncle Sandeep's car with soda cans while Sam is inside it.

"Sam's journey toward her Sikh heritage comes at a price--of familial conflict and ultimately violence, when the local gurdwara (Sikh temple) is firebombed and Sandeep is assaulted. After the firebombing, Sam and another Sikh girl, Balvir, come to learn an important lesson when Balvir shouts, 'What is wrong with people?...Sikhs are not Muslims!' and a Muslim classmate responds, 'Balvir, you want to distinguish between Sikhs and Muslims because of . . . what? Do you think the violence will be less if you do?'

"Lively writing, pitch-perfect slang and cultural references, and a realistic depiction of the ups and downs of friendships and romantic relationships make this novel a great choice for the holidays-and for the rest of the year too."

Thanks, Lyn!
Posted by Melissa Walker at 4:32 AM

Lyn, I've been dying to read this book since I heard Neesha read from it at the NYPL. Now I'm even more excited. Thanks!

Melissa, it's a total must read!
I loved this book. It really brought home the prejudice Muslims face here in America, especially after 9/11. I hope everyone reads this book and speaks up when they see people being teased or harmed becuase of their religion, ethnicity or sexual orientation.

Thanks for all the comments--and for the link to my cover story, Melissa!

I wrote an essay for the online (Albany) Times-Union about ethnic profiling, pairing this book with Dave Eggers's just-published Zeitoun. Written for general adult readers, Zeitoun is the true story of a Syrian-born Muslim man living in New Orleans, who stayed behind during Hurricane Katrina and rescued a number of his neighbors, only to be arrested and then held in a secret FEMA prison on suspicion of terrorism. For those who've read Shine Coconut Moon and are looking for some nonfiction on this theme, Zeitoun is a great choice.