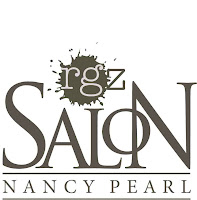 We're honored to have her here as part of the rgz SALON, a feature where four of the top kidlit experts clue us in to the best YA novels they've read recently. Here's Nancy!

Gregor the Overlander, Suzanne Collins' first novel, is one of my all-time  favorite fantasies. A brave eleven-year-old hero, page-turning adventures, moral dilemmas, and a super ending made it a perfect book for middle-grade  readers. Now, in The Hunger Games (the first volume of an intended trilogy), Collins has written a remarkable and thought provoking novel for teens about the oppression and dehumanization of its citizens by an all-powerful central government, evoking George Orwell’s 1984 and Aldous Huxley’s Brave New World. At the same time, it’s an

impossible-to-put-down action-adventure-romance story. Panem is a wealthy and powerful city in post-apocalyptic North America; it’s surrounded by twelve outlying, poverty stricken districts that serve, in effect, as colonies providing the resources needed to maintain the capitol’s wealth. Sometime in the past the districts attempted a rebellion, which Panem brutally put down. As a reminder to the districts of their powerlessness, the Capitol requires each one to choose, by lot, one boy and one girl between the ages of 12 and 18 to participate in the annual Hunger Games, the ultimate TV game show, a fight to the death on live TV, in which the last contestant alive wins fame and fortune. The Games are treated as a huge celebration in the Capitol, with pre-game up-close-and-personal interviews of each “Tribute,” betting on, and opportunities to send aid to, one’s favorites, and round the clock watch parties. The story is told in the voice of 16-year-old Katniss Everdeen, who we get to know and care about deeply during the course of the novel. When her beloved 12-year-old sister, Prim, is chosen by lot to be the girl tribute from district 12 (formerly know as Appalachia), Katniss bravely, and to the astonishment of all (but within the rules of the game), volunteers to take her place, and sets off on the most dangerous, and exciting, “adventure” of her life. And the reader gets to accompany her every step of the way. One of the things I found so remarkable (and disorienting and disturbing) about this book is the way it was able to pull me, emotionally, into the excitement of the celebration and the adventure of the game itself, almost as if I were experiencing it as a wealthy citizen of the Capitol, even though I knew, intellectually, that what I was reading about was a government forcing children to kill other children. The Hunger Games, surely destined to be a classic of teen literature, is a superb choice for book discussion groups of all ages.
Posted by readergirlz at 7:45 AM

It is so WONDERFUL to have the rgz SALON begin and Nancy Pearl lead off with THE HUNGER GAMES. Thank you, Nancy! Great recommend!

Fantastic review, Nancy! We are so excited to host you. I've got the book on hold at the library and can't wait for my number to be up (47 out of 219! Hurry, hurry!).

It's a really great book. I've read it twice, and am sorely tempted to go back for more.

Welcome aboard, Nancy! Glad to have you join us. :)

I like this rgz salon concept - and I LOVED Hunger Games. I agree with Nancy that this is a book that is begging to be discussed at book clubs everywhere.

I can't wait to read this book.

Just wanted to let you know that I've linked to this great review here: Random Wonder