The Battle of Darcy Lane by Tara Altebrando 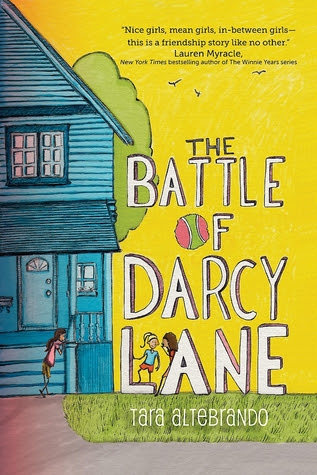 The Battle of Darcy Lane by Tara Altebrando is a great pick for our middle school readers!

All Julia really wanted to do this summer was hang out with her best friend, Taylor - and maybe her neighbor/friend/secret crush Peter, too. Then Alyssa moves into the neighborhood. Julia immediately doesn't like her; Taylor does. And just like that, Julia's best friend has a new friend, and Julia has a rival.

Alyssa is really into a ball-bouncing game called Russia. At first, Julia doesn't care for it, but then she realizes that she might be able to beat Alyssa at her own game. Over the course of the summer, while Julia tries to hang on to her friendship with Taylor, she also attends band camp, bonds with Peter over a TV show she's not supposed to watch, and challenges Alyssa to an epic game of Russia. She also avoids cicadas and tries to talk her parents into letting her move into a different room in their house.

Julia's an only child, born to parents who love her and - get this - love each other. It's refreshing to read a book in which the parents are happy together, and it's wonderful to see how the child reacts to that relationship. In this case, Julia feels left out, not only because she is the youngest member of the household AND the only kid AND she has to go to bed earlier than her parents, but also because her parents are so close, she feels like there's no room for her sometimes - like she's interrupting something. There's a beautiful moment in which Julia overhears her parents talking outside, their voices drifting up to her window:

Not only does this perfectly capture their relationship, it also ties back to Julia's concerns about her own best friend. Taylor is spending more and more time with Alyssa and less time with Julia. Teasing, confusion, and jealousy ensue. (Goodness, I don't miss middle school!) But thankfully, instead of being your typical mean girl story, this book offers something more plausible, something more satisfying and more age-appropriate, with the Russia showdown and the additional revelations in the denouement.

The Battle of Darcy Lane is a solid story for young readers. It's kind of like a modern-day Now and Then. Julia tries to test the boundaries a little a couple of times, and she sometimes struggles over the right thing to do, but overall, she has a pretty good head on her shoulders. Though the word "tweens" or the term "tween fiction" may not appeal to everyone, it's appropriate when you consider what it means: between. When you're eleven and twelve, you might feel trapped between your little kid years and your teens, torn between wanting to feel more grown up and wanting to stay a kid. This is best exemplified by the scenes in which Julia feels compelled to put away her dolls and knickknacks, even though she still kind of likes them.

Tara Altebrando has a knack for depicting honest relationships between protagonists and their families and friends, and I regularly recommend her YA books to teens looking for realistic modern-day stories. Now I can give The Battle of Darcy Lane to slightly younger readers. I also plan to read her other middle grade novel, My Life in Dioramas.

And who knows - maybe I'll have the opportunity to play Russia somewhere along the way, too.

This review was originally published at Bildungsroman.

The end of the book includes instructions on how to play the ball-bouncing game referred to as Russia or Onesies, Twosies. I also found instructions at the website howstuffworks.com. Have fun!

Posted by Little Willow at 1:37 PM

This is a new take on the theme of growing up. It's similar to other books about girls in their tween years, but it's different too. It offers insights that I haven't seen before on this topic. The book is well written and the characters feel true to life.