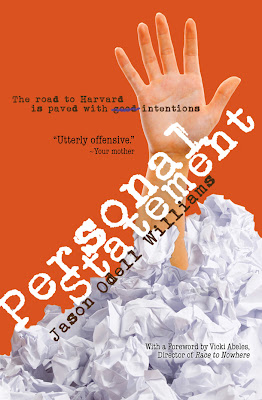 Jason Odell Williams is an Emmy-nominated producer, and his first novel was just optioned for a three-picture deal. Whee! Plus, Jason tells a good Cover Story. Here he is:

"So once I had a solid first draft, I sat around over dinner and drinks with my publishers Carey Albertine and Saira Rao and we started brainstorming cover ideas. We thought about something hurricane-related, like a trashed backyard that could look like either the morning after a storm or a wild party. But that didn’t really say enough about the 'Personal Statement'-college application part of the book. Another idea we floated around was having a shot of the major players in some sort of pose like an album cover or action shot during the Hurricane prep, but again that felt too linear and only dealt with the volunteer aspect of the story. 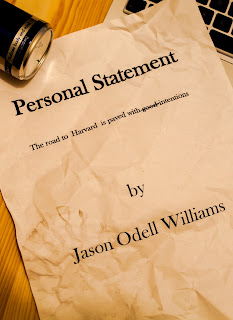 "So we came up with the idea of crumpled up paper, all of these false starts when trying to write a personal statement and succinctly tell strangers at college 'who you are.' The one we had sort of settled on was the one with the can of Red Bull and the 'cover' page of a personal statement with a boot print and coffee stains on it (right). And we were pretty happy with it and were going to go with that. But Carey & Saira wanted to punch it up a little, so they asked Nick Guarracino, who had recently been brought on to do the illustrations for another book they were doing, to take a look at the cover and make it pop more.

"He read some of the book, looked at our cover, and instead of punching up the old one, he came up with 6 completely different options. My publishers looked at them all and knew right away it was the hand thrusting up from the pile of pages. They texted me the image and I took one look and was blown away. The last I knew, our cover was going to b the page with the coffee stain on it, so to then suddenly see this amazing, bright, dynamic, bold arresting cover, I was so excited and thrilled. I immediately texted back and said 'YES that’s the one.' (I may have used some profanity in my excitement... as in 'Holy SH*TBALLS that's amazing! I love it! Yes!') 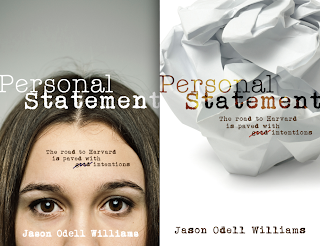 "And I actually never saw these other options (left) until this week. And while the girl’s face was a close contender, there is something sad and melancholy about it that’s not quite right for the book. Also, it’s hard to put a real face (even half of a face) on a book cover. And I never liked the idea of 'casting' a character before someone reads the book. (What if the Rani on the cover doesn’t match the Rani in your head?) So in the end, I know we made the right call with the hand thrusting up from the pile of balled up pages.

"Nick told me the photo was made by taking a picture of a friend’s hand and then using photo shop to add the balled up pages and the color in the background. Then he made the hand look more feminine and ethnically ambiguous. What I like about that is then the hand becomes like a mirror… you see what you want to see. When I first saw it, I thought it was a white guy’s hand. Others see a white girl or an Asian or Indian-American girl. And now when I look at it I can't decide if it's Emily Kim's hand or Rani's. So it’s cool that the hand has that 'every-person' quality to it.

"And now, the more I look at the cover, the more I see how right it is for this book. The hand at first seemed to be simply frustrated to me, but now I also see defiance and breaking free and standing out from the crowd. The hand is coming up for air after drowning in expectation for so long. Of course, I’m reading a lot into it and people looking at the cover for the first time might never see any of that, but I think what the cover does convey, even at first glance, is a sense of being bold and explosive and exciting. It would make me stop twice if I saw it on a shelf (even a 'digital' shelf!) And for all of those reasons, I love this cover couldn't be happier!"
Posted by Melissa Walker at 9:15 AM

Hey, very nice site. I came across this on Google, and I am stoked that I did. I will definitely be coming back here more often. Wish I could add to the conversation and bring a bit more to the table, but am just taking in as much info as I can at the moment. Thanks for sharing.
Disability Tricycle

I’m really glad Personal Statement was written. College admissions and competitiveness is not a topic often discussed in fiction even though they define the lives of countless students all over the country.

Students often combine education with professional activities. This does not allow you to devote enough time to study. Namely, it is necessary when writing term papers that accompany student life at all stages of training. Coursework, in the assortment presented on the network, can be far from complying with all the rules and regulations, be non-unique and low-quality.You can buy term paper from professionals in their field on the website customessaymeister

I often visit various blogs. I like to find more information for myself. I recently found editors who can rate my essay https://plagiarismsearch.com/rate-my-paper.html. I'm very happy to tell you about it.