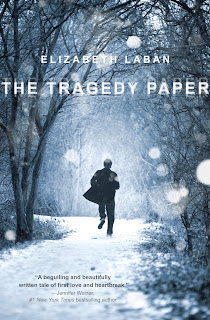 Elizabeth LaBan's first novel, The Tragedy Paper, drops on January 8th, and it has a wintry cover we love. Here she is to talk about the process:

The book takes place at a prep school in New York that was, in my mind, based on a school I went to for my last two years of high school. I guess I imagined the cover would be an image of the school – maybe the quad or one of the buildings. Now that I think about it, I didn’t have a strong picture of what the cover would be while I was writing the book. That strikes me as funny, in light of one of the questions I answered at the back of the book. I was asked about the initial idea for The Tragedy Paper, which led me to talk about how I have wanted to write a book since I was in fourth grade. At that time, I worked with a friend and we created a character named Chopped Suey – but all we ever did was design and redesign the cover! So I guess it says a lot about my progress as a writer that I was finally able to get away from that and focus on the words!

"I knew there were a few covers in the works, but I was not brought in to talk about it until there were two possible designs. I have to say, I’m glad about that because I never could have come up with this cover – and now I can’t imagine any other image on the front of the book. I would love to give a shout out to the jacket designer Stephanie Moss!

"I was shown two covers. The one that was ultimately chosen was the one I liked best and, to be perfectly honest, I liked it immediately. I still think about the second cover sometimes, the one that was not chosen..."

Posted by Melissa Walker at 8:07 AM