Our Seattle HOST, Stephanie Guerra, is here with a stellar interview!

Hi girlz! I attended the Amazon Breakthrough Novel Award ceremony in June, and had the pleasure of meeting the 2010 winner, Amy Ackley, author of Sign Language. Amy spoke eloquently about her passion and persistence, and thanked Amazon for giving her a chance to break into a very tough industry. 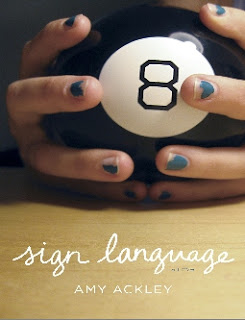 Did you always want to be a writer?

Growing up, I was that introverted kid that always felt like I was on the outside looking in at life.  I found the world complex and fascinating, and was always looking at a situation and thinking, “What if?”  On long car rides, I would watch out the window as farmhouses and small towns passed by, and imagined I was a girl living in that farm, who had a best friend that went to that church, and they spent hours together playing hide-and-seek in those cornfields … my active imagination ensured that I was never bored or lonely.

I loved to read and write, and, to me, English classes were my reward for getting through math.  My father was a high school English teacher and writer who tried to get his work published to no avail.  He’d send in a story to a magazine, get a rejection letter, and scrap that story to write another.  His only fault may have been his lack of tenacity, or self-confidence.  Early on, this is what prevented me from pursuing a writing career - the fear of not being good enough, and not “making it” as a writer.  That, and the belief that all authors were rich people that lived on the East Coast, or writers with connections in the publishing world.

I was living on my own at 16.  I worked three jobs while finishing high school, and supported myself by working full time at a courthouse while attending college at night.  When it came time to choose a career, pursuing writing seemed about as practical as becoming a sunscreen salesperson at the North Pole.  I’d eaten enough Ramen Noodles to last me a lifetime, so I decided to pursue a career that would afford me stability and a decent income.  I finished undergraduate and graduate degrees in Human Resources and landed a job as a labor relations specialist with one of the Big 3 automakers.

Yet the desire to write never faded.  It only grew stronger.  When my first daughter was born, I took a leave of absence from work, and to keep my brain from turning to mush I decided to try what I’d always wanted to do: write a novel.

I wrote that first book, and it was terrible.  This writing thing wasn’t as easy as it looked.  I studied the craft, read everything I could get my hands on, and started on another book.  And another.  When I lost two friends to cancer, both of whom had left young children behind, I decided to write about my own experience losing my dad to kidney cancer when I was a teen.  It began as a memoir, but in time the characters took on lives of their own.  SIGN LANGUAGE was born.

I sent an early version of SIGN LANGUAGE to several agents, and after getting many rejections, finally found an agent that wanted to represent me.  She helped me revise the manuscript to make it stronger, and sent it in to a few publishers.  All rejected it, and the agent told me she didn’t think it was going anywhere, so we parted ways.  I wasn’t about to give up on the book, though.  I took the feedback I’d received from the editors at the publishing houses and used it to improve the manuscript.  I then set it aside until I learned that the sponsors of the Amazon Breakthrough Novel Award were adding a Young Adult Fiction category for 2010.  I dusted the old manuscript off, sent it in, and, long story short, it won the contest and SIGN LANGUAGE was published by Viking Juvenile in August 2011.

I now have an agent for a second young adult book, and am working on a third.  I won’t let the fear of striking out keep me from pursuing my writing dreams.  And I’ve gotten my kids used to eating Ramen Noodles, just in case.

How much of your writing is based on your own experience as a child or teenager?

SIGN LANGUAGE, while fiction, is very much drawn from my own experiences.  I lost my dad to cancer when I was 13.  Losing a parent at such a young age – at any age – is something you never get over, but learn to get through.

In other books I’d read about the death of a parent, the parent was referred to in past tense.  These books focused on the teen’s grief after the parent had passed.  I hadn’t come across a book that focused on the effects on the family when a member is dying of a terminal illness.  When writing SIGN LANGUAGE, I wanted readers to really get to know the dying character as a person, to better understand the void he left when he was gone.  When a family member is terminally ill, the grief process – denial, anger, bargaining, depression, and acceptance – starts before the actual loss occurs.  I, myself, clung to denial for a long time, as does the main character, Abby, in SIGN LANGUAGE.

Some of the events and details surrounding the father’s illness in SIGN LANGUAGE are taken from my own experience, because it is what I know about cancer and how I recall the reactions of those around me.  The emotions are 100% authentic.  While writing this book, I was able to take myself back to the sad, scared, confused teen I was back when my dad was sick and, looking back through an adult lens, was better able to understand my sometimes erratic behavior after his death.  Losing a family member as a teen is especially difficult, as many of a teen’s peers have never experienced such a loss yet and cannot understand how it changes absolutely everything.  It is my hope that, for some readers, Abby can be that friend that understands.

The other books I have written and continue to write do not so closely parallel my real life, but there will always be elements of me in the characters.  The most gratifying thing as a writer, for me, is to hear from readers that talk about the characters I write as if they are real people that they can identify with.  To me, that means I have done my job by telling the truth, my truth, in my fiction.  It is so gratifying to learn that others experience the world the way I do.

Do you have any advice for young writers?

While I wouldn’t suggest veering as far away from an English degree as I did, having majored in Training and Development in college, I had to write training programs and make hour-long presentations in front of large groups of my peers and professors.  It terrified me, but proved to be extremely beneficial to me as an author.  By forcing myself to gain a level of comfort with public speaking, this introvert was able to break out of her shell, and it has helped me get through, and enjoy, book signings and events.  Get yourself out there in front of others.  Push yourself out of your comfort zone, for that is where the magic happens.  Consider studying communications or marketing in conjunction with writing.  Writing a fantastic book is only half the battle … you have to let people know it exists!

Other advice?  If you’re going the traditional publishing route, try to finish more than one manuscript in a particular genre before submitting to agents or publishers.  Publishers don’t just want to find great books; they want to develop great authors.  Before winning the ABNA award, one editor at a publishing house had asked if I had a second young adult manuscript to submit along with SIGN LANGUAGE.  I didn’t have another YA book that was camera-ready yet, so they weren’t willing to gamble on me.  Having several works to submit proves that you are in it for the long haul.  And the possibility of a multiple-book deal?  You could do worse.

Finally, be persistent.  Keep writing.  Keep submitting.  Remember that every author gets rejected.  Learn to embrace and appreciate criticism.  Getting feedback of others will make your writing even better.

Are you working on anything now?

I’ve finished a second contemporary YA novel, and am represented by literary agent Jennifer DeChiara.  If all the stars align correctly, I’ll have news about this book to report soon!  In the meantime, I’m working on two other YA manuscripts.

How can readers find you? 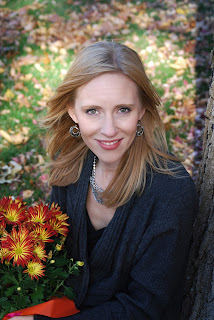 Thanks and congrats, Amy! And thanks, Stephanie!