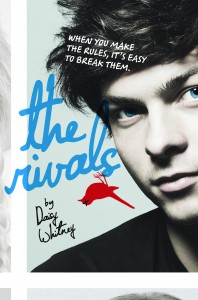 "I only vaguely had a cover idea in mind for The Rivals, and it was similar to what I had originally envisioned for The Mockingbirds (read that Cover Story) -- something akin to the hardback cover of The Disreputable History of Frankie Landau-Banks, i.e. something that just screamed "girl at boarding school." And what I've learned as a reader is that I very much prefer books with strong girls on the cover -- like Frankie, or like the cover of Where She Went (read that Cover Story), or What I Saw and How I Lied.

"The cover change (from the Mockingbirds hardback and The Rivals arc) came about through a conversation I had with my editor about a year ago about the type of covers I like and so on. She really wants her authors to love their covers, so when she learned that I had liked the hardcover, but would have preferred a photographic cover, she asked me to send her my favorite covers and that they would consider a redo for the paperback and the hardcover of The Rivals..."

See the early covers, and read the rest of Daisy's Cover Story, at melissacwalker.com.