Hey, it’s Liz here, your YA author and rgz Seattle Host! I plan to go to lots of YA book events in Seattle and pass the buzz onto you. That’s great news for me because if there’s one thing I get really jazzed about, it’s sharing the thrill of a new book.

So. Thursday night. University Bookstore. I was super-excited to meet Lisa Mantchev, who didn’t have so very far to travel to get to Seattle. As she puts it, she resides “out where the sparkly vampires live.” (Also known as the beautiful Olympic Peninsula.) 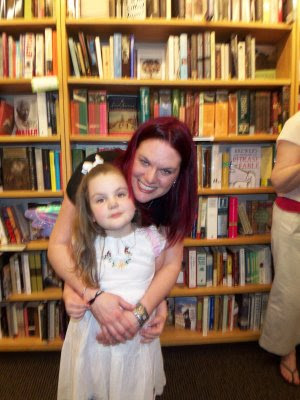 Here she is! You can’t see it in this photo, but her daughter totally has fairy wings!

Lisa was at the store to celebrate the release of her much-anticipated first YA novel, Eyes Like Stars, the first in a series about The Theatre Illuminata.

Eyes Like Stars is about a girl named Beatrice Shakespeare Smith, who lives in a theater where every character from every play ever written is hanging around, and whose best friends are four naughty fairies from Shakespeare’s A Midsummer Night’s Dream.

You have to check out The Theatre Illuminata web site and click on the backstage pass, where you’ll find all kinds of info about the characters, amazing cover art, and so much more. You can even read the first chapter of Eyes Like Stars. Then you’ll be as excited as I am to dig in. 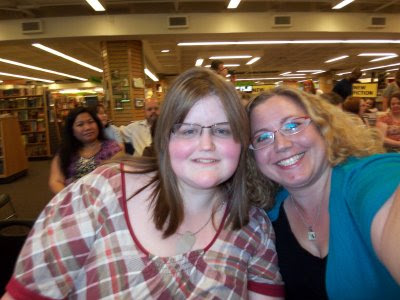 We settled in to listen as Lisa read an awesome scene, and answer questions. Here are my favorite tidbits: Eyes Like Stars started as a 5,000-word short story, the book’s in a second printing after only being out for one week, Lisa is quite a baker, there are amazing contests in the works, and a secret project will soon be revealed on the book’s web site.

The night was full of chatter and celebration and cupcakes. Plus, costumes! 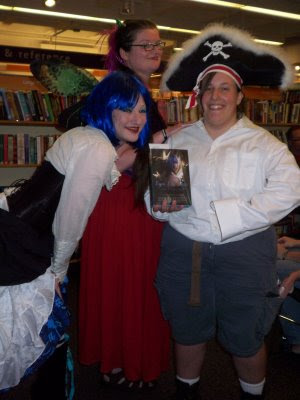 Serious fun. This must’ve made Lisa feel like such a rockstar. Characters come to life! 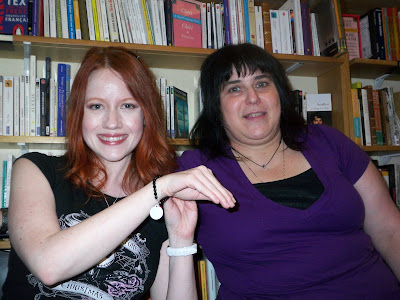 That’s Richelle Mead, author of (among other books) the super-popular Vampire Academy series! And the friend with her makes jewelry based on Richelle’s books; order away at Richelle’s site. 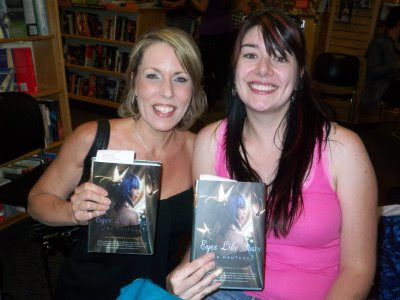 I met two women with upcoming YA debuts, each in Spring 2010. Look for The Body Finder by Kimberly Derting and The Witch’s Alphabet by Caitlin Kittredge; both writers are part of The Tenners, a group full of first-time YA writers.

Ooh. I caught sight of something special! 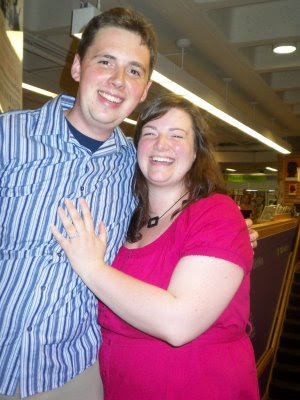 It’s Jackie, of the rgz postergirlz. Remember the recent announcement of her engagement? That’s the lucky guy! And the ring!

After visiting with friends new and old and chomping the best chocolate cupcake ever, the line filtered away, and I was able to do what I came to do: get Lisa to sign her sparkly new book. 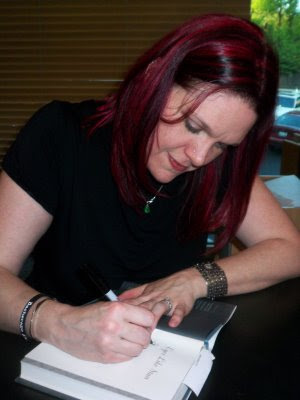 Sorry there was a photo delay, rgz. My error. I think it's fixed!

This is a wonderful book, so fresh and inventive! Congrats, Lisa!

And thank you, Liz, for the report!

Thumbs-up for the fairy wings and the fairy story! What a great turn-out.

Wish I was there! Waaaah. I have my fairy wings and everything. But snaps to the new hair, Lisa. You look superfly. *respect*

It was great meeting you!

Glad to meet you and learn of this blog!
-Elizabeth, Bertie's fairy.

University Bookstore - and Lisa! - sure know what they're doing.
<3