We're honored to have Lyn here as part of the rgz SALON, a feature where four of the top kidlit experts clue us in to the best YA novels they've read recently. Today, she reviews What Can't Wait by Ashley Hope Perez (Lerner/Carolrohoda, 2011) and A Good Long Way by René Saldaña, Jr. (Pinñata Books, 2010).
"Talented young Latinas who struggle to reconcile their dreams with the demands of their families are featured in two new books by Latino authors. In both What Can’t Wait and A Good Long Way the girls’ families expect them to cook, clean, babysit, or contribute to the family income through part-time jobs that encroach on their time for schoolwork and rest. While responsibility to family is important, these strong girls find ways to overcome the restrictions and limitations and to build the foundation for a better life than that of their mothers and sisters.

"Although Jessy is only one of three point of view characters in A Good Long Way, Saldaña weaves her story in with that of the two brothers, Roelito and Beto, Jr. After a fight with his father, Beto, Jr. runs away to Jessy’s house, hoping she’ll take him in. Jessy refuses, fearing the rage of her alcoholic father if her friend is discovered. The next day, Jessy, an honor student, breaks down in class, remembering her own attempts to run away, while Roelito looks for his older brother at school and Beto Jr. goes to work with his father in order to reconcile with him. Saldaña explores a man’s responsibility—a father for his family, and an older brother for his younger brother—and a girl who has to give up responsibility for her dysfunctional family in order to save herself.
"A Good Long Way takes place over a single 24-hour period in which the precipitating event leads to new insights and changes for all three characters. Jessy’s strength in facing her difficult family situation helps Beto, Jr. to see the good in his own father’s rules for him, while she decides to bide her time until she can go to college and make her own life. Saldaña uses multiple points of view effectively to tell his characters’ stories and differentiate them. He explores a theme about which he is passionate without being preachy, instead letting his characters come to their own conclusions. The ticking clock adds to the tension and urgency, helping to make this short but profound novel a first choice for reluctant readers. 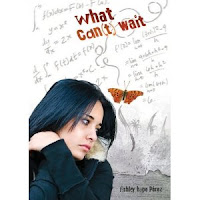 "While Jessy looks forward to college, Marisa, the protagonist of What Can’t Wait, sees her academic achievements belittled by her immigrant parents, neither of whom went beyond the sixth grade in school. The youngest of three children, Marisa, a high school senior with dreams of studying engineering at the University of Texas, is expected to meet the needs of everyone else in her family, including her five-year-old niece because older sister Cecilia’s husband is an abusive drunk. When Cecilia’s husband is critically injured in a work accident, Marisa’s father promises that their family will be taken care of. No one will go hungry or become homeless, but everyone will have to make huge sacrifices. For her part, Marisa has to take on more hours of work at the supermarket, as well as caring for her niece. Her schoolwork suffers, and she has to make hard choices about the viability of a relationship with the boy she likes. Attending the University of Texas in Austin means abandoning her troubled family altogether, because they live in Houston and she will only be able to visit occasionally on weekends.
"Perez sets up a seemingly intractable conflict between a teenage girl’s loyalty to her family and her quest for individual fulfillment and success. She shows both sides of the values that have kept Marisa’s impoverished family together and with the bare necessities at the same time as those values reduce the options of its most ambitious members. Like A Good Long Way, Perez’s novel doesn’t preach, and it doesn’t offer easy solutions, but it depicts a strong Latina teenager who seizes control of her life in pursuit of a better future for herself and, in the long run, for her family too." -Lyn Miller-Lachmann
Posted by Melissa Walker at 4:28 AM

Thanks for the review! I'm always happy for folks to be thinking about how the book connects to other titles, too. I'm adding A GOOD LONG WAY to my to-read shelf! Piñata (the YA/kids section of Arte Público Press) is a source of great titles!

These both sound great!

I've been hearing so much about "What Can't Wait!" Both books sound fab, thanks for showcasing!

Lyn: like Ashley, I'm grateful that folks are even reading my work, and so thanks the more for this way way awesome review. And you've been talking up What Can't Wait since around NCTE/ALAN, and foolish me, I haven't got my copy of it yet, but I will now that you've put mine is what seems (and I trust your judgement wholly) a great title for YA readers. And Ashely, you're going to begin to see a lot of improvements on the covers on Pinata Books titles, starting with the re-issue of Nilda by N. Mohr coming out this Spring. Those folks are pushing that envelope. Kudos to Kanellos and that whole bunch at APP/PB.

This sounds like the perfect pairing of books. I just finished What Can't Wait and it was so good! I think people (myself included) tend to forget that in some families, family comes before everything, including education. That's a tough choice and I have immense admiration for anyone who makes that choice, whatever they decide.

A Good Long Way is sitting in my TBR, clearly I need to get the book out of the pile! sounds wonderful and timely after reading What Can't wait.