Featured Title: A CONSPIRACY OF KINGS, by Megan Whalen Turner

Hello, readergirlz, and welcome to our first official Featured Title of February! This month's theme is Loyalty, and our trusty postergirlz have done an amazing job, as always, of selecting books that perfectly embody that theme!


Today I'm so happy to shine our spotlight on A CONSPIRACY OF KINGS, by Megan Whalen Turner. 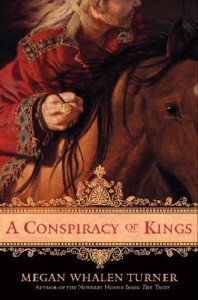 "Teenaged Sophos is his uncle's heir, but his love of poetry and lack of interest in ruling have caused his father to send him to a remote villa. When it is attacked by the king's enemies, Sophos is sold into slavery, where he begins to mature and develop both physically, from the hard manual labor, and emotionally. He makes the decision to escape slavery and try to resume his place as heir and eventually king of Sounis, traveling to Attolia to try to recruit support from its queen and king, Sophos's friend, Eugenides, the protagonist of The Thief and The King of Attolia. Layers of intrigue follow Sophos as he tries to protect Sounis from various groups of enemies, leading to a surprising twist at the conclusion."
--School Library Journal


Here's what Megan Whalen Turner has to say to us about Loyalty:


When I was younger, I had an idea that virtues like patience, honesty and loyalty were pretty simple and always for the good. (That’s what it meant to be a virtue. Duh.) They might not be easy to practice, but the concepts involved didn’t seem particularly convoluted. That lasted right up until I had two friends who got into a huge fight and stopped speaking to each other. Divided loyalties are not only complicated, they are almost inevitable. We have loyalty to our families, loyalties to our friends, loyalties to our jobs or our co-workers, or our communities. In that tangle there are bound to be conflicts somewhere. Sometimes, it’s hard to see what the virtuous options are. Is honesty always the best policy?  Is patience always the best course of action? Should you stand by your man? Really?
Almost all of my stories are Fantasy, set in made up worlds with supernatural elements, but that’s not because they have nothing to do with real life. My main character in A Conspiracy of Kings is Sophos.  He is the heir to the King of Sounis and would do almost anything to avoid inheriting a kingdom when his uncle dies. He thinks he wouldn’t make a good king, and by avoiding the responsibility he is being virtuous. Real virtue turns out to be more complicated than he thought.
Really, everything is more complicated than he thought. Sophos wants to trust his friend Gen not only with his life, but with the kingdom of Sounis. He’s more than a little surprised when his friend dumps that loyalty back into Sophos’s lap with a big “No, thank you.”
Sophos has to figure out for himself just what friendship and loyalty mean when you are responsible for an entire country. Then he has to convince Gen to see things his way. Even if it means dumping Gen on his ass to do it.
So true - loyalty may seem like one of those "easy" dictates of virtue, but often, real life is way more complicated. Have you read this book yet? Has Sophos inspired you to rethink your own definition of loyalty? What about someone else in your life - real OR literary?

I actually just read and reviewed this entire series on my blog within the past week and absolutely loved it! I really loved the loyalty Sophos felt for Eugenides but I was at times surprised at how they interacted in this book, which I thought was brilliant and possibly the best in the series.

Here's my thoughts on this story: http://kaydotsidot.blogspot.com/2011/02/conspiracy-of-kings-megan-whalen-turner.html

Hey, thanks for the link to your blog, Kasey - we'll have to check it out!

Kasey, Wow, thank you for all the kind words. I am glad that you've enjoyed the books. It's really hard for me to predict people's reactions to what I write and it's a big relief when readers seem to enjoy the complications in Gen and Sophos's relationship.

The best books have the stickiest complications, in my experience!

"Then he has to convince Gen to see things his way. Even if it means dumping Gen on his ass to do it."

I love MWT so much!!!! Even in three paragraphs she manages to be brilliant.

This is a great book to choose to depict loyalty because it show how complicated a concept it is.

Thanks, Megan, for your series. You are truly loyal to your readers and respect them. I so admire the density of these books!

I do a little happy dance every time I come across another book blog that has reviewed this series. It's one of my favorites. I'm re-reading The Thief right now. :)

As a librarian, this series is one that I recommend to two groups; adults who want something to introduce them to fantasy - it is just fantastical enough, but not drastically so. And young readers who finished Percy Jackson but are intimidated by "long books" like Harry Potter. Both groups fall in love with this smart, provocative series. Oh, and I also recommend it to everyone else, too...

Conspiracy of Kings is in School Library Journal's Battle of the Books. If you love the book, vote for it in the Undead Poll, to come back from the dead if one of the earlier judges doesn't see its brilliance. http://app.fluidsurveys.com/surveys/laura-z/2011-slj-undead-poll/